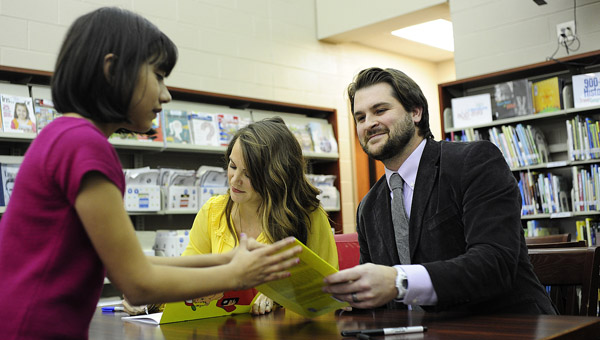 Students at Riverchase Elementary School have their copies of “TJ Put Your Phone Away,” a book by Erin and Blake Gilchrist, signed during a signing at the elementary school on Nov. 13. (Reporter Photo/Jon Goering)

HOOVER — Meet TJ, a school-age boy who misses out on real life because he’s always glued to his smartphone. Sound familiar?

TJ is the brainchild of Riverchase Elementary School physical education teacher Blake Gilchrist, and his wife, Erin, who co-authored and illustrated their new children’s book titled “TJ Put Your Phone Away.”

The Gilchrists signed copies of their new book at Riverchase Elementary Nov. 13, where students and faculty praised the couple for their relevant storytelling and illustrations.

“My wife and I talked about writing a children’s book for a while, but we wanted to make sure and write something relevant and original,” said Blake Gilchrist, who’s taught at Riverchase Elementary for the past eight years.

“We came up with the idea about a boy who misses out on the real world because he is always playing on his phone. Then we just started throwing ideas and different scenarios around until we came up with a good story line and characters,” Blake Gilchrist said.

Erin Gilchrist, an English teacher in Trussville City Schools, illustrated the book in addition to co-writing and editing. She said the book is for “anyone who has realized that they’ve been consumed in their phone for an hour and missed the punch-line to a joke.”

“It’s for people, like us, overwhelmingly consumed with our handheld devices, social media, and communications via Internet, that we often forget human interaction and what it’s like to live off-screen,” Erin Gilchrist said.

The Gilchrists spent one year writing and illustrating “TJ Put Your Phone Away,” and have received positive feedback thus far.

The Gilchrists sold out of copies during their RES book signing, and have since ordered more.

“The book is a great lesson for all ages,” Blake Gilchrist said. “We thought it would be a fun way to teach a lesson about personal interactions for parents and children.”

TJ isn’t the only character to learn a lesson in the story, Blake Gilchrist said, as TJ’s parents also live a plugged-in lifestyle.

“TJ’s parents miss out on some his life events because they’re playing on their phones,” Blake Gilchrist said. “When Erin’s sixth graders read it, they were excited to see the parents learned a lesson, too.”

The book is available for purchase by emailing blakegilchrist@gmail.com, or online via Amazon.com and crestpublishers.com.

VES students, parents give thanks