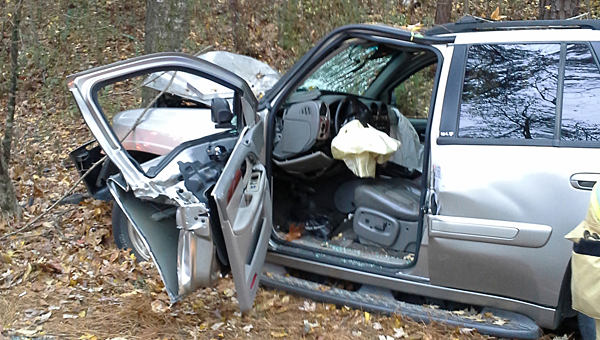 The Pelham police and fire departments responded to a wreck on State Park Road on the morning of Nov. 23. (Contributed/Gary Waters)

At least one man suffered “severe” injuries after his vehicle collided with a tree on State Park Road the morning of Saturday, Nov. 23, according to the Pelham Police Department.

The wreck happened when the driver’s silver Chevrolet SUV left the road and collided head-on with a tree.

Pelham Police Capt. Larry Palmer said at least one man was transported by ambulance to UAB Hospital with “severe” injuries. As of Nov. 25, the man’s name had not been released, and police were still investigating the cause of the wreck.

The wreck came four days after Pelham Mayor Gary Waters and several Pelham residents discussed the future of the tree tunnel during a Nov. 19 town hall meeting at the Pelham Civic Complex.

Waters previously called the tree tunnel the “most dangerous” stretch of road in the city. During the meeting, Pelham Police Lt. David Rushton said seven traffic fatalities and 82 injuries have occurred on State Park Road since 1995.

Several Pelham residents – many of who were members of the “Save the Tree Tunnel on State Park Road” Facebook group – said they would oppose doing away with the tree tunnel.

Waters said State Park Road is owned and maintained by the federal Highway Department and the Alabama Department of Conservation, and said the city has no direct control over the future of the road.