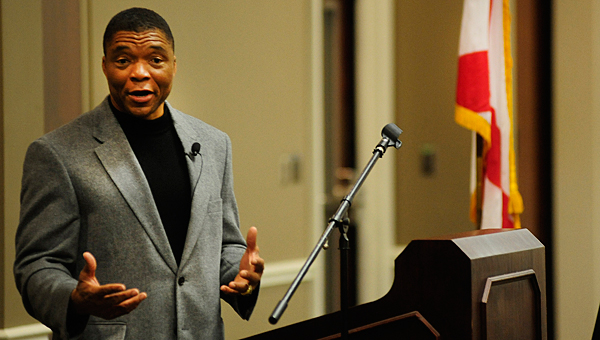 When the Broncos were already down by a touchdown late in the fourth quarter, the Browns were threatening to score again to put the game away. As a nickel back, Castille frequently saw game action on third-down situations, but had already been beaten once on a play leading to a Browns touchdown earlier in the game.

After predicting the Browns’ play, Castille changed his play route and ended up intercepting the ball, setting up the Broncos’ come-from-behind victory.

“I rolled on top of the ball with about 2 tons of Cleveland Browns on top of me,” Castille said during the Greater Shelby County Chamber of Commerce’s annual prayer breakfast at the Pelham Civic Complex on Nov. 26. “We were able to win the game because of that play, and it was all because of a simple prayer.”

Castille, who now operates the Birmingham-based Jeremiah Castille Foundation for at-risk youth, contributed much of his life’s successes to prayer.

After graduating from Alabama and being cut from the Tampa Bay Buccaneers, Castille said a prayer during a Monday Night Football game helped open another door in his life.

“I said ‘Lord, I sure would like to play in Denver,” Castille said to the crowd of about 100 at the breakfast. “Less than 24 hours later, the Denver Broncos called my house.”

Castille grew up in a crowded household, and was born with a “backpack full of problems,” but used his challenges to better himself, he said.

“In those problems, I found my purpose. You need to be very careful when you complain about your problems,” Castille said. “Turn your problems over to Jesus, because he is the greatest problem solver there is. There is nothing you can face that can defeat the love of God.”

During the breakfast, the Pelham Fire Department’s color guard presented the colors and Pelham Mayor Gary Waters led the pledge of allegiance. William Stewart with the American Village portrayed Patrick Henry and presented George Washington’s prayer for the nation.

FROM STAFF REPORTS HOOVER — The city of Hoover’s Christmas tree lighting ceremony is set for Dec. 2 at 5... read more