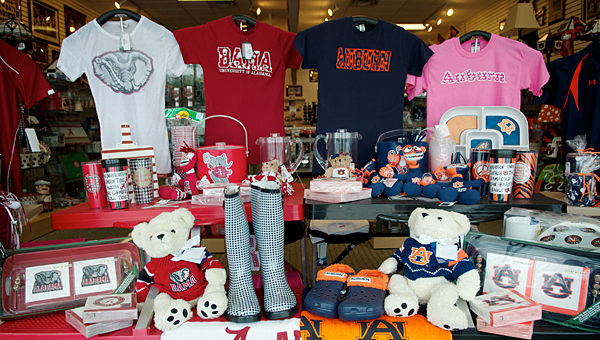 The Campus Spirit store in Alabaster is split down the middle between Auburn and Alabama. (File)

“I like it better when both teams do well all season. Until that last game, of course,” Leslie said with a laugh a few days before the No. 4-ranked Auburn Tigers and the top-ranked Alabama Crimson Tide faced off in one of the highest-stakes Iron Bowls in decades. “But whoever wins, that’s a plus for us.”

For local stores such as Campus Spirit in Alabaster’s South Promenade and Team Fever off U.S. 31 in Pelham, the week leading up to the Iron Bowl typically brings big business. But managers at both stores agreed this year has brought a significant boost in business.

“People definitely seem to be more excited about it this year,” Team Fever Manager Alex James said on Nov. 26. “This week, it’s been more cold-weather gear and long-sleeve tees.”

Both stores sell a bevy of crimson and orange items ranging from hats and car decals to polo shirts and flags, and are popular destinations for Shelby County’s college football fans.

A few days before the Iron Bowl, each store was reporting a different set of customers.

“I’ve got to say, our Auburn side has really picked up. It was kind of sad last year,” Leslie said with a laugh, noting her store is split down the middle between Alabama and Auburn gear.

James said his store was seeing more crimson and white.

“It’s been mostly Alabama fans,” James said. “I don’t know if that’s because Birmingham is more of an Alabama market or not.”

James and Leslie said they had higher hopes for the victor of the Iron Bowl, which would continue a string of national championships from the state stretching back to 2009.

“Of course, Alabama will go (to the national championship) if they win out,” James said. “With a little bit of luck, I think Auburn could do it if they beat Alabama and then win the SEC Championship.”

By NEAL WAGNER / City Editor Members of Pelham’s newly appointed Board of Education won’t waste any time getting to... read more