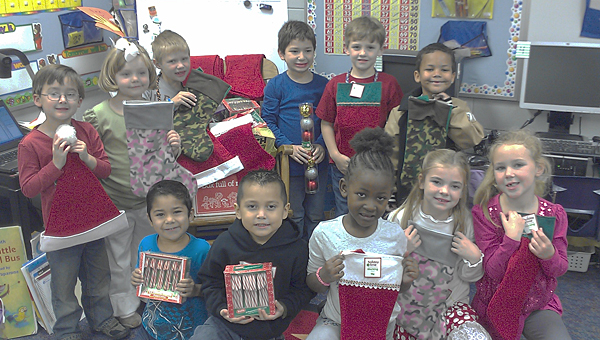 United States soldiers stationed overseas will have a brighter holiday season thanks to a kindergarten class at Alabaster’s Meadow View Elementary School.

Kids in Julie Howanitz’s kindergarten class recently wrapped up a “Seasonal sights, sounds and sweets” collection drive to benefit soldiers who will not be home for the holiday season.

Through the drive, kids collected items such as Christmas lights, Santa hats and candy canes to ship to the soldiers, Howanitz said.

Howanitz said she got the idea to organize the Christmas drive after working with the MVES school resource officer, Jamison Lee, to ship Thanksgiving letters from the school’s students to the soldiers.

After discovering a website displaying pictures of soldiers holding up items shipped to them, Howanitz said her students became driven to ship Christmas cheer to the troops.

“Once they saw those pictures, they got so excited,” Howanitz said.

Howanitz’s students said they were happy to collect the items to benefit those who cannot be home with their families this Christmas season.

“It made me feel good because they are fighting for us,” said kindergartener Daniley Connell.

“It made me happy,” Hall said. “We gave them stuff for Christmas since they are not going to be home.”

“I am happy because they get some stuff for Christmas,” said Fuller.

Howanitz said the students are anxiously awaiting the soldiers’ receipt of the large box of items.

“My class got so excited when someone brought in an item for the soldiers,” Howanitz said. “They would tell me every day how much the soldiers were going to love the items they were sending.”