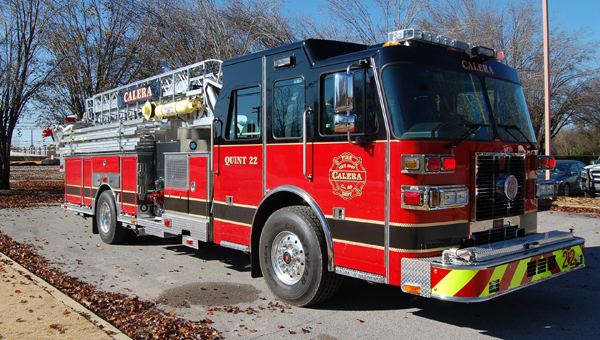 CALERA – The day before Thanksgiving, Calera Mayor Jon Graham said the city had a lot to be thankful for with the arrival of a quint, or a five-in-one fire engine that serves both as an engine and ladder truck. The multipurpose truck has a pump, carries water, has a fire hose and also functions as a ladder truck with an aerial apparatus.

“This is going to change our entire operation as far as our initial tactics for firefighting,” Calera Fire Chief Sean Kendrick said of the truck, which arrived Nov. 27. “Now we’ll have three companies responding instead of two, and we’ll have this ladder truck capability on every fire now.”

The truck’s primary responsibility will be to perform rescues from multistory buildings as well as provide firefighters with a safer method of getting on the roofs of buildings to ventilate smoke, Kendrick said. Before the arrival of the new truck, crews had to climb ladders, whereas now they will board an aerial platform and ride it from the ground to the roof of a building.

Graham said the truck was purchased for almost $800,000 using the city’s capital budget and is “the best that we could buy.”

“It’s a little more expensive because it is an aerial platform truck,” said Graham, noting baseline engines run just under half a million dollars. “We’re very excited. It’s an new piece of equipment that we’re very proud to have.”

Kendrick said the truck was designed by a committee of Calera drivers and firefighters, who “built it around the specific needs of our city and to make it function for their job.”

“They had 100 percent of the voice as far as the type of truck that we got and the design of it,” he said.

Though the truck’s home will be Station 2 on George Roy Parkway near the Shelby County Airport, Kendrick said all city firefighters will be trained on the truck before it goes into service, and all of the city’s three engines will be in service at all fires.

“We recently hired 10 firefighters to staff this truck, so we’ve increased our staffing on every shift, which gives us more firefighters to initially respond and more people on duty to handle all of the different calls in the city,” he said.