Woman arrested for chemical endangerment of a child

WILTON – A Wilton woman was arrested and charged with chemical endangerment of a child on Nov. 28.

Gloria Devould, 23, of Wilton, was arrested at her home and taken to the Shelby County Jail on Nov. 28 after being charged with chemical endangerment of a child, according to Capt. Ken Burchfield with the Shelby County Sheriff’s Office. Devould posted a $15,000 bond and was released later that day.

Devould was arrested because of an incident that occurred Oct. 13, according to court documents. She will appear before Shelby County Circuit Court Judge Dan Reeves Dec. 18. 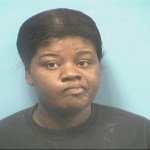 According to Alabama law, a person who commits the crime of chemical endangerment of a child “knowingly, recklessly or intentionally causes or permits a child to be exposed to, to ingest or inhale, or to have contact with a controlled substance, chemical substance or drug paraphernalia.”

Devould has been charged with a class B felony, or a case in which a child has suffered “serious physical injury by exposure to, ingestion of, inhalation of, or contact with a controlled substance, chemical substance or drug paraphernalia.”

If convicted, Devould could face between two and 20 years in prison.