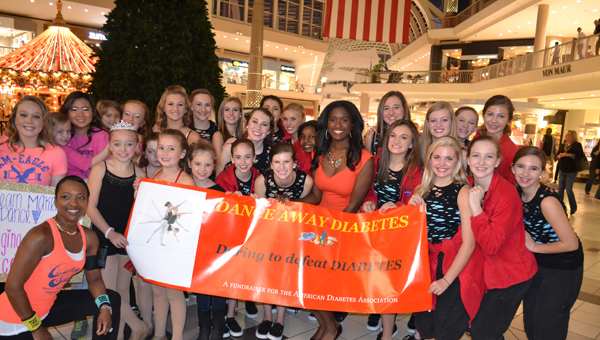 Miss Hoover 2013 Briana Kinsey, center, is the brainchild behind the third annual Dance Away Diabetes fundraiser held Nov. 10 at the Riverchase Galleria. The event raised more than $5,000, with all proceeds going to the American Diabetes Association. (Contributed)

HOOVER — More than 120 teenagers from area dance teams participated in the third annual Dance Away Diabetes fundraiser at the Riverchase Galleria Nov. 10.

The Dream Makers Studio Dance Team of Columbiana, under the direction of Jenny Lespi, was voted the No. 1 dance team. Participants and lookers-on learned how to confront, fight, and stop diabetes, and were encouraged to adopt healthier lifestyles.

The Sigma Eta Chapter of Delta Sigma Theta Sorority, Inc. at Samford University and Angela Scoggins of Camp Scoggins also were on hand at the event. Scoggins led the audience in Zumba and line dancing.

Miss Hoover 2013 Briana Kinsey, a junior at the University of Alabama, is the brainchild behind Dance Away Diabetes. Kinsey, whose platform is “Daring to Defeat Diabetes,” wants to get more teenagers involved in raising diabetes awareness.

“As a community, we need to do everything we can to end this disease. We are asking everyone to help stop diabetes, whether it is by attending this event or getting involved in other ways,” Kinsey said. “My hope is that dance teams all over the country will host a Dance Away Diabetes event!”

More than $5,000 was raised at the event, with all proceeds going to the American Diabetes Association.

By NEAL WAGNER / City Editor The Pelham Board of Education will meet on the second Tuesday and fourth Thursday... read more