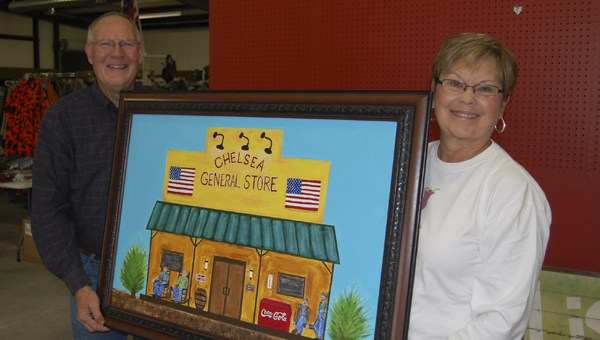 CHELSEA — Chelsea City Councilman Dale Neuendorf and his wife, Mary, are the proud owners of the new Chelsea General Store set to open at 9 a.m. Dec. 9.

Located off U.S. 280 East next door to the Chelsea Antique Mall, the Chelsea General Store offers a wide variety of wares from tools and gadgets to gifts to military surplus.

The Neuendorfs, along with general manager Clint Scherf and other staffers, spent much of last week organizing the store’s 75,000-plus items. A rain-or-shine month-long sale will mark the store’s debut. The sale will last from Dec. 9 to Jan. 7.  Tent sale hours of operation will be Monday through Saturday from 9 a.m. to 6 p.m. and Sunday from 1 to 6 p.m.

“Everything has happened within a month,” Dale Neuendorf said of his latest venture. “I was inspired by an old country store in Hattiesburg, Mississippi, where my son lives.”

“He walked in one day and said we were opening a general store,” Mary Neuendorf said, laughing. “I’ve always wanted to have a store that offered crafts and home decor.”

Dale Neuendorf’s grandfather owned an old country store, and he has fond memories of sitting out on the store’s porch eating bubble gum and candy.  The Neuendorfs hope to recreate a similar atmosphere at their store, as well as pay homage to piece of Americana.

“This is a Christian business, but it’s also a fun business,” Dale Neuendorf said. “We’ll have a popcorn machine making fresh popcorn every day.”

The Neuendorfs are currently working with local artists to have an old country store mural painted on the storefront.  The mural image, already hung and framed inside the Chelsea General Store, features four men relaxing on the store’s porch. An old-fashioned Coca-Cola freezer sits nearby.

“We want it to have the look and feel of an old country store,” Dale Neuendorf said.

By NEAL WAGNER / City Editor Magazine lovers now have another reason to frequent the Pelham Public Library, as the... read more