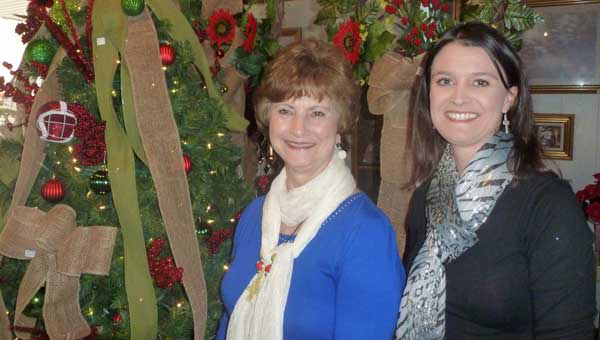 Gail Coleman with her daughter Lora Coleman Gowers at her retirement reception at Gail’s Florist on 100 Main Street, Columbiana.

COLUMBIANA – Gail Coleman loves flowers and people. As the owner of Gail’s Florist in Columbiana for the last 25 years, Coleman is known for her talent of arranging flowers and personal customer service.

The florist shop on the corner of Main and College Streets has been a staple business in Columbiana since the 1950s. The corner has changed and the owners and business name have changed but the phone number – 669-7061 – has remained the same since the beginning.

“I believe the first florist was Gerdie Jones and the shop was called Jane’s Florist,” Coleman said. “Then it was called Flowers by Nancy and owned by Clark Dean, then Mike Miskelly. I bought the business and changed the name to Gail’s Florist on March 1, 1986. The same phone number has been used through the different businesses and owners to today. The Lord rolled the business over with the phone number to me and again to the new owner.”

Friends and family held a retirement reception for Coleman on Saturday, Nov. 16 at Gail’s Florist. Customers came by all day, signed the reception book and enjoyed refreshments.

“It is my customers that I will miss so much. I thank the Lord for my business and for my faithful customers,” Coleman said. “Without them there would be no legacy of Gail’s Florist.”

Coleman grew up in Columbiana and attended Shelby County High School. Through her working years she raised six children. She has 12 grandchildren, three great-grandchildren and lives on Highway 47 in Columbiana.

“I plan to travel a little in retirement and play with my grands and greats,” Coleman. said “I want to be a stay at home grandmamma. I am confident that the new owner will love and appreciate my customers as I have. The legacy of Gail’s Florist will continue on with Lisa.”

“I have worked for Gail for 15 years and she is like family,” Sandra Merrell said. “Gail is such a sweet, caring person and the best boss.”

Gail’s Florist has rolled over again with the same name and phone number to the new owner Lisa Nivens of Chelsea.