Magazine lovers now have another reason to frequent the Pelham Public Library, as the library recently began offering an online database through its website. 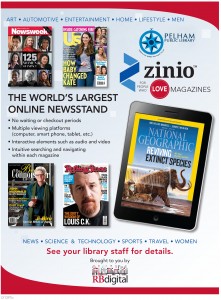 The library has partnered with RBdigital to offer the Zinio for Libraries online newsstand.

To access the database, library patrons can visit Pelhamlibrary.com and click the Zinio link on the library’s home page. On the magazine database page, patrons can create a Zinio account by entering their library card number.

Pelham Library employee Russ Mitchell said mobile device users can more easily set up their accounts by first downloading the Zinio app and setting up an account before following the links on Pelhamlibrary.com to access the library’s magazine database.

By accessing the Zinio database through Pelhamlibrary.com and entering a library card number, Pelham library patrons can download full issues of dozens of magazines to their computer or mobile devices.

“Once they download the magazine, it stays on their device until they delete it,” Mitchell said. “There are no due dates and no late fees.”

Currently, the Pelham Library’s Zinio database contains about 24 magazines, but the database will grow in the future, Mitchell said. Back issues of the magazines on the database also will be available from October 2013 onward.

Mitchell said Zinio is the first digital magazine database offered by the Pelham Library, and said he is hoping the service will allow the library to reach a new demographic.

“It doesn’t require a lot of tech savvy, and the (magazine) files are fairly small,” Mitchell said.

For help with setting up and using the Pelham Library’s Zinio database, contact Mitchell at 620-6418.

Man arrested for sexual abuse of a child younger than 12