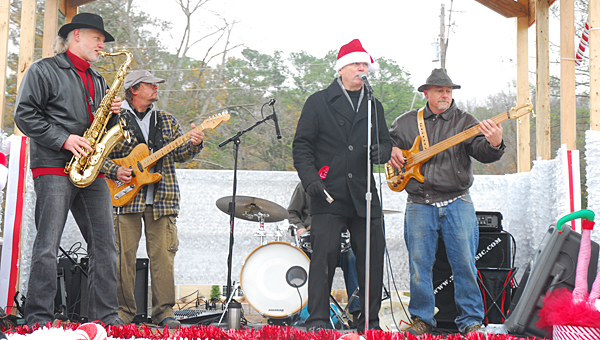 2 Blu and the Lucky Stiffs perform on a float in Alabaster’s Christmas parade on Dec. 7. (Reporter Photo/Neal Wagner)

Thousands of spectators braved frigidly cold temperatures and lined the southbound side of U.S. 31 to enjoy the parade’s 110 entries and kick off the Christmas season.

The parade, which was organized and directed by Alabaster personnel and the Alabaster Beautification Board, started near the Alabaster-Pelham line and traveled down U.S. 31 before turning right onto Second Place Northwest, traveling down First Street Southwest and ending at the stop sign in front of Southbrook Village.

Each parade entry stopped in front of the judging stand at the former Alabaster City Hall building near the intersection of U.S. 31 and Second Place Northwest to be judged.

The winners in this year’s parade were:

-Most Entertaining: Joy’s Dance Company and 2 Blu and The Lucky Stiffs