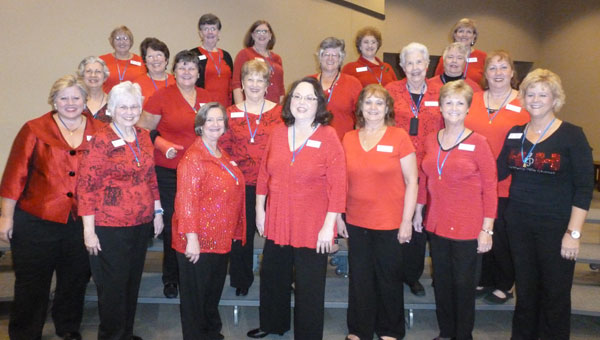 Harmony Hills Chorus will perform their Christmas concert “Share the Joy” on Monday, Dec. 16 at 7:30 p.m. at Restore United Methodist Church on Highway 119 in Alabaster.

The Harmonettes, the female barbershop quartette of Thompson High School, will perform along with Surprise Package Quartet. Light refreshments will follow the free concert.

Harmony Hills is the local chapter of Sweet Adelines International, a non-profit organization of 24,000 women who perform barbershop-style a cappella four-part harmony: tenor, lead, baritone and bass. Sweet Adelines was formed in 1945, and Harmony Hills was organized in 1971. The chapter is one of 500 in the U.S. and 14 countries.

Natalie Allen became the music director in August 2012. She grew up Georgia in a musical family and graduated from Birmingham Southern as a music education major. She has been the music director at Thompson High School since August 2000, where she leads six choirs and two quartets. She also sings in a Nashville Sweet Adeline chorus, which has won five international medals. In spring 2013, Harmony Hills, under her direction, won first place in the small division chorus and Allen won the novice director award.

“Being the Harmony Hills director has helped me grow as a musician,” Allen said. “I have learned to listen differently and develop a more discerning ear.”

“Singing and being part of Sweet Adelines allows you to meet different people and make new friends,” said Debra King of Columbiana. “I have been singing since 1996. We rehearse every Monday night at 7 p.m. at the Restore building in Alabaster. The door is always open if there is anyone that would like to visit and give it a try.”

“I’ve been a member of Harmony Hills Chorus for almost eight years,” said Heidee Vansant of Columbiana. “The educational aspect is both challenging and rewarding. I have definitely become a better and more confident singer. I have always found joy in music, singing, dancing and performing and this is the perfect outlet!”

Come and be blessed with Christmas musical cheer on Dec. 16 by Harmony Hills.

Mary, Joseph and baby Jesus pose with visitors during “A Walk through Bethlehem.” From left, Grayson Littleton, Bailey, Merrell and... read more