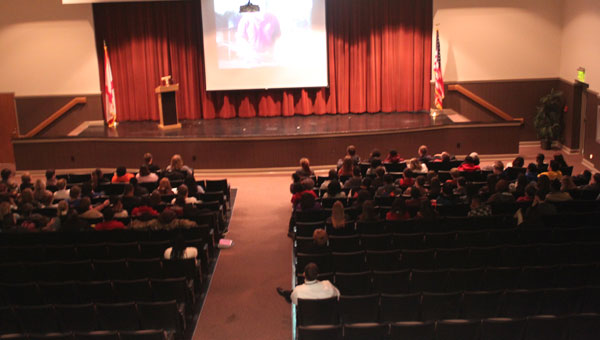 The traditional class field trip typically consists of traveling via school bus to a specified location for an educational enrichment activity. However, thanks to today’s technology, students no longer have to travel to experience an out-of-the-classroom encounter, with perhaps, a shark, as science students at Montevallo High School recently learned.

After receiving approval from both the State Department of Education and Shelby County Schools, distance learning equipment was set up and tested, so students could join with 10 other schools to “visit” the Dauphin Island Sea Lab. One of Dauphin Island Sea Lab’s educators presented a variety of sharks and rays and then dissected a shark to show the external and internal anatomy and explain the functions of certain organs in the body.

“In my classes, students learn about the diverse environments within our state,” science teacher Brent McCaleb said. “Alabama has mountains in the north and the gulf in the south. The ecosystem that ties all this together is amazing. Students already have a wealth of knowledge about most animals found in Alabama, but the shark is often related to extreme misconceptions.”

Through this virtual experience, students were introduced to sharks common to Alabama waterways and Dauphin Island. During the live streaming of the discussion and dissection, interaction was possible with the Dauphin Island Sea Lab; not only could students see and hear the educator, but he could see and hear students.

“The use of modern technology to achieve the virtual field trip exposes students to the potential such technology holds for the future,” McCaleb said. “Overall, I felt this was interesting to students and provided them with a better understanding of sharks, although I did have a few students tell me that they would be scared of sharks regardless of what the scientist said.”

Students witnessed the value of another science, marine biology, and the possibilities of an occupation in that field.

“It was a unique opportunity for us to see in real-time a shark and its dissection,” MHS senior Madison Fancher said. “There is a lot more about sharks than I knew; the teacher even showed us the jelly-type substance under the skin that sharks use to sense things in the water.”

Harmony Hills Chorus will perform their Christmas concert “Share the Joy” on Monday, Dec. 16 at 7:30 p.m. (contributed) By... read more