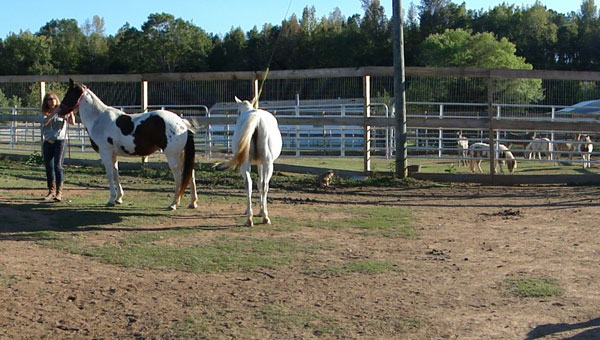 Lauriann Loveless and daughter Karman have a wide array of animals on their farm in south Calera. (contributed)

At 19, Karman Loveless lives life by her own rules.

“I can take things that have happened to me in my life, dwell on it and stop my life right there or I can say ‘c’est la vie’ and go on with my life and be fine,” she said. “Everybody has that choice to make.”

Diagnosed at age 7 with Ehlers-Danlos syndrome, a connective tissue disorder, Karman was destined to live her life out in a wheelchair. Because she was restricted from riding horses, her mom Lauriann sold every horse on their farm with the exception of an old barrel horse.

“Karman would sit on the porch watching the horse graze and beg to ride him,” Lauriann said. “One day I told my son Robert she’s unhappy and if this is the way it’s going to be, let’s let her be happy. We put Karman on the horse, Robert held her and I led. We did this day after day until she was strong enough to saddle the horse and ride by herself. When a check-up revealed her muscles had grown, her doctor said impossible. He asked what kind of therapy she was having and I said, ‘None, I put her on a horse.’”

Though barrel and rodeo racing are in Karman’s blood, Lauriann bought her a western pleasure horse. It wasn’t long before Karman had the horse jogging around barrels. The horse was sold and replaced with a scarred-up, skinny mare they were told would never amount to anything.

“They told me this mare is crazy,” Karman said. “She broke every lead rope and every halter I had. She sat back every time you tied her and tried to buck around barrels, so I found out just how crazy she was. I named her Zee James, Jesse James’ wife, cause she’s so crazy I figured the name fit.”

Zee, great-granddaughter of Secretariat, is half thoroughbred and half quarter horse. She won every mid-state adult championship last year and is state champion in stakes race this year – Lauriann placed third.

Karman also has myasthenia gravis, which was passed to her before birth. “At the time I didn’t know I had it,” Lauriann said. “My contractions were stopped once because I was so weak. When I did have her, she was born legally dead. She’s my miracle, my hero. She changed my life. Made me totally rely on God. I couldn’t find one doctor to give me one positive thing and she outdid them, she showed them.”

In addition to raising eight horses, four miniature horses and two Shetland ponies, Karman has three dogs, one cat, an alpaca, a pig, a goat, a sheep and a zebra. She also rescues injured or abused animals, taking care of most of them herself.

Lauriann, a mortician, funeral director and embalmer, is employed with Charter Funeral Home. “Karman was 9, in a wheelchair, when I started there 10 years ago,” Lauriann said. “Bill and Norma Grant took care of her when I met with a family or directed a service. I wouldn’t have been able to work had it not been for them.”

Karman aspires to obtain a degree in horse chiropractic. Contact her for animal rescue at 205-434-7406.