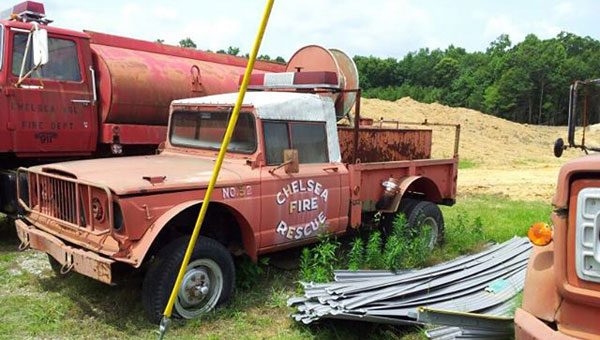 Ross Rich will drive an old military jeep, one of Chelsea Volunteer Fire Department’s earliest vehicles, in Chelsea’s Christmas Parade. He has finished mechanical repairs and plans to have it all restored for next year’s parade for a before-and-after effect. (contributed)

Ross Rich was in middle school when Chelsea Volunteer Fire Department got an old military jeep.

“Someone drove it over to the school,” he said, “And I really liked it, but never thought I would ever own it.”

But today it is part of his collection of old military vehicles he is working to restore.

The Chelsea Volunteer Fire Department was formed in March 1977 and the jeep acquired in December. A 1964 military surplus fire truck was their only other vehicle.

Bill Weldon, one of Chelsea’s first firemen, said they repainted the old green jeep, took out the benches running down each side in the back and put in a tank.

“We had two hose reels on top of the tank,” he recalled, “and we (firemen) could stand in back and hold onto that.”

A history of the CFVD, written in part from 1992 notes by Verne Craig, first Fire Chief, describes the jeep:

“On December 8, 1977, we obtained a 1965 5/4 ton military surplus Kaiser Jeep with four-wheel drive. We made a brush truck out of it by adding a 400 gallon tank that we built ourselves, a Homelite pump, and dual rear wheels. We plumbed it to take 2-1/2”, 1-1/2”, and 1” hose connections. It could also draft water from ponds and streams. Many a time that little truck has performed small miracles for us.”

Weldon recalled a woods fire on the hillside behind the old Lloyd’s Restaurant where the little truck got hung up with all four wheels off the ground and fire coming.

“We had to physically pick it up and set it on the ground,” he laughed.

Rich bought the jeep last May at a City of Chelsea auction when they were getting rid of old fire equipment, he said. Then, during the summer he found parts, all new old stock originals, to complete mechanical repairs.

He has it running now and plans to drive it in the Chelsea Christmas parade Dec. 21. He plans to finish restoration next spring and drive it, looking like new, in next year’s parade.

Family couldn’t wait to give thanks together