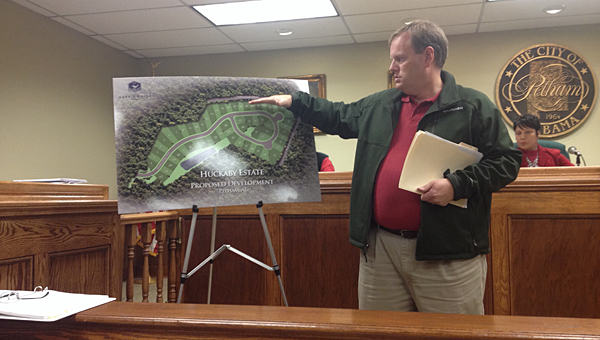 A developer looking to construct 62 new garden homes off Shelby County 261 in Pelham will fund a hydrology study of the area and present it to the Pelham Planning Commission before the commission makes a decision on the development.

Harris Doyle Homes has requested the city rezone more than 21 acres off Indian Lake Drive from agricultural to a residential garden home district to allow the company to move forward with constructing the new subdivision.

During a Dec. 12 public hearing on the matter, about 35 Pelham residents – most of who were from neighborhoods along Shelby County 261 – voiced concerns about frequent flooding in the area. Several residents said they wanted to ensure the new development, if approved, would not worsen flooding and drainage issues along the Shelby County 261 corridor.

Over the past several years, heavy rains have caused flooding in neighborhoods such as Saddle Run and Stratford Place, which would be downstream of the proposed garden home development.

During the public hearing, Harris Doyle Homes President Brooks Harris and Alabama Engineering Company representative Bob Easley said the garden home development would include an “oversize retention pond” capable of withstanding a 100-year flood. Easley also said the development would be designed to minimize water runoff into surrounding areas, such as Indian Lake.

Harris said the retention pond would help to slightly decrease the amount of runoff water flowing to the downstream neighborhoods.

“The last thing anyone wants to do is to put something in place that is going to make it worse downstream,” Easley said, noting he is planning to present the development’s plans to the Goodwyn, Mills and Cawood engineering firm, which is designing a flood mitigation project along Shelby County 261.

Following the public hearing, the Planning Commission voted unanimously to require Harris Doyle Homes to present a hydrology study outlining the proposed development’s impact on drainage in the area.

“I think it only benefits everyone in the room to do that,” Harris said.