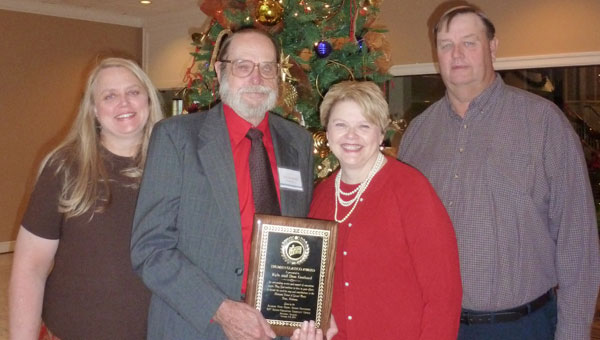 Don and the late Kyle Gothard received the Truman Glassco Award for outstanding service and support of Southern gospel convention music at the 2013 Alabama State Gospel Singing Convention. Convention music is based on seven-shape notation and is taught at the Alabama School of Gospel Music where Don is a member of the board of directors.

Don grew up in a singing family and went to his first singing school at age 14, where learned to read music. He married Columbiana native Kyle Lyon in 1956, moved to Columbiana and joined her family’s church – Columbiana First Baptist. The Gothards had four children, 10 grandchildren and seven great- grandchildren, who all live in Shelby County.

“He is a great father,” Tony said. “He has always been there for me. His music touches me.”

Don is a long time member of FBC choir. After their children were grown, Don wanted Kyle to learn convention singing and encouraged her to go to singing school. They went to the Alabama School of Gospel Music together. They traveled to singings and took their two week vacations at singing schools over the years.

“Singing has brought me closer to the Lord,” Don said. “To me, most of the songs are a sermon. The sermons teach me to live right.”

At the last singing school they attended in 2012, Kyle did not feel well. Soon after, she was diagnosed with stage 4 pancreatic and ovarian cancer. Severely ill in the hospital, Alice Shepard presented the Truman Glassco Award to Kyle and Don the day before she came home with hospice. She died Aug. 12, 2013.

On Nov. 9, 2013 Don attended the 83rd Gospel Convention with his children where he was presented the award. The bittersweet day for the Gothards’ years of service was emotional for his beloved Kyle was there in spirit only.

Convention Singing will come to Columbiana in 2014 with four concerts at Columbiana First Baptist Church as Gothard continues to promote this Southern gospel genre. The free concerts will begin at 6:30 p.m. on Jan. 25, April 25, July 26 and Oct. 25, 2014.

Harmony Hills Chorus will perform their Christmas concert “Share the Joy” on Monday, Dec. 16 at 7:30 p.m. (contributed) By... read more