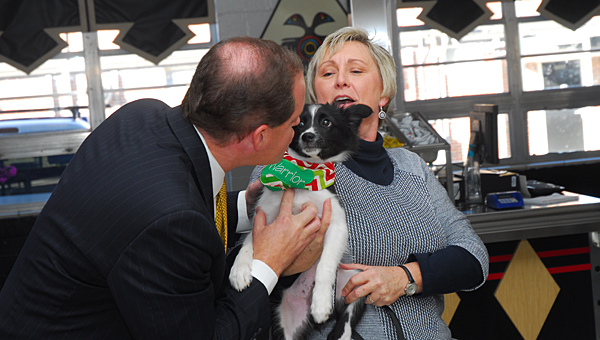 Alabaster’s canine mascot, Warrior, wasn’t sure what to think as state Sen. Cam Ward, R-Alabaster, leaned in for a smooch in front of hundreds of Thompson Intermediate School students on Dec. 16.

After Ward planted a kiss on the beloved Australian shepherd puppy, the students broke into applause as Warrior backed away and let out a high-pitched bark.

“He promised that if we got 500 items, he would agree to give Warrior a little smooch smooch,” TIS gifted teacher Rita Sparks told the students. “Always remember the importance of community service and giving back to your community.”

For the past several weeks, gifted students at TIS have been collecting items to donate to the Alabaster and Helena-based Faithful Paws Mission, a no-kill animal shelter founded by Alabaster resident Christina Tatum.

On Dec. 16, stacks of items ranging from large bags of dog food to cat toys lined tables in the middle of the school’s cafeteria. During the donation drive, the school’s gifted students made frequent announcements on the TIS morning news show, and several students recruited support from local businesses.

When the drive concluded, the fourth- and fifth-grade students had collected more than 800 items, thanks in no small part to Ward’s promise to the students, said Sparks.

Tatum, a Helena native, said the donations will greatly help the upstart animal shelter, which currently is caring for about 40 cats and dogs who otherwise may have been euthanized in other shelters or died as strays.

Faithful Paws works to provide foster care placement for animals who are looking for their forever homes, Tatum said.

During the presentation, Tatum and other Faithful Paws volunteers showcased a few animals in the shelter’s care, including a dog recovered after he was struck by a car on a local road.

“It means so much to us for the kids to want to do this,” Tatum said after the presentation. “We are trying to make it to as many schools and events as we can right now.”

To learn more about the organization, visit Faithfulpawsmission.org or Facebook.com/FaithfulPawsMission.

First-graders shop for their families