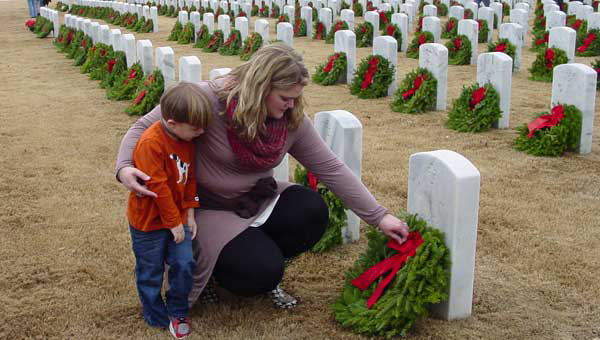 Krista Langston and her little son lay a wreath on the grave of her father, William Val Seale.

MONTEVALLO – Despite the threat of heavy rain, hundreds participated the fifth annual Wreaths Across American program at the Alabama National Cemetery in Montevallo on Dec. 14.

First on the agenda was a short program that included the reading of the poem, “Widow Left Behind,” written by Deborah Bartlett, and read by the master of ceremonies, Mel Shinholster, President of the Blue Star Salute Foundation. The keynote speaker was Maj. Gen. James W. Darden of the U.S. Army Reserve (retired).

Following the program, the families of those interred in the cemetery were invited to follow the bagpiper, Jeff Jones, onto the field to place a wreath upon the markers of their loved one. Then friends and volunteers laid wreaths on all other markers in the cemetery.

“We also take and display, in different communities, our photo-board of almost 200 Alabamians who have fallen in the service of their country since 9/11,” he added.

According to the printed program, “The Wreaths Across America annual ceremony grew from a tribute that began in 1992 when the Worchester Wreath Company of Harrington, Maine, had a surplus of holiday wreaths and donated them to Arlington National Cemetery to be placed in one of the older sections of the cemetery.”

From that beginning, the program has spread throughout the U.S. to more than 150 locations. Wreaths Across America is committed to remembering and honoring the fallen, and to teaching young people the value of freedom and the importance of honoring those who have sacrificed much to protect that freedom.

The Blue Star Salute Foundation of Alabama, the Support Committee for the Alabama National Cemetery, and the Bessemer Civil Air Patrol sponsored the program. The three groups raised $36,000, which covered the cost of the 2,400 live Maine Balsam wreaths.