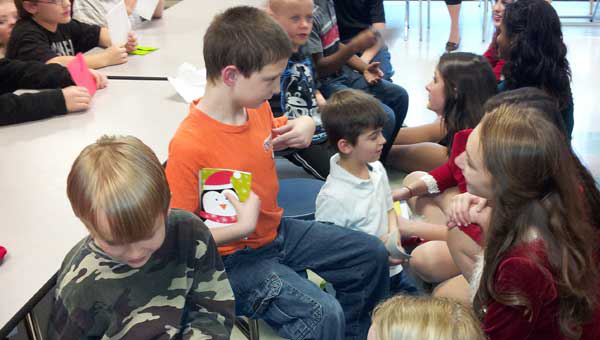 PELHAM – The Pelham High School Band’s Visual Ensemble recently visited the Cerebral Palsy Center, Hand in Hand, and the Linda Nolen Learning Center to spread holiday cheer to students with special needs. Katherine Burnside, director of the Visual Ensemble, said girls performed for the students at the three programs, as well as played and visited with them.

At the Cerebral Palsy Center, the girls took the time to make a photo holding a sign for a long-time resident named Josh, who was sick and not have to see the girls perform.

“He was upset he was going to miss the girls, so they took a photo so it could be sent to him,” Burnside said. “We have been going there for many years, and the girls who have been before remember this sweet person.”

Hand in Hand is a preschool that has a mixed population of both typical and special needs students. The girls were able to spend some time performing and playing with the students at this center.

The last stop was at the Linda Nolen Learning Center, where they performed and read Christmas cards to the students.

“It was interesting to see the children interact with the PHS girls,” Burnside said. “We finally had to tell the students the girls had to go back to the high school.”

“The principal at LNLC was amazed how quickly the girls jumped in and just sat and talked with the students,” Burnside continued. “No hesitations. No reservations. No judgments.”

Shelby County’s Marjorie Head (No. 4) goes up for a shot in a Dec. 13 contest against Chilton County. (Contributed/Brandon... read more