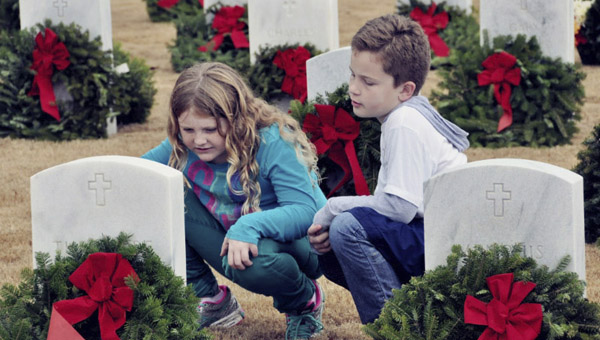 NORTH SHELBY — Stonecreek Montessori Academy third grader Nikole Hardy welcomed the Christmas season this year by placing wreaths at veterans’ grave markers at the Alabama National Cemetery as one of Stonecreek’s representatives in the Wreaths Across America ceremony Dec. 14.

“Seeing all these people risk their lives to save us so we can have freedom is the best present in the world,” Hardy said.

Wreaths Across America marked the culmination of a number of events in which Stonecreek students, in cooperation with a corporate sponsor — Birmingham-based Enjoy the City — paused to salute the nation’s veterans all holiday season long.  Said Stonecreek executive director Melinda Bray, “We want to create a culture of appreciation and respect among our students and families for our veterans.”

After gathering pledges for donations based on the number of bowling pins hit, Stonecreek held a Bowling for Veterans event on Veterans Day, Nov. 11, with a goal of raising money to provide Thanksgiving meals to veterans and others in need in the Birmingham area. Enjoy the City supplemented the funds raised to reach a goal of feeding 1,000 people on Thanksgiving.

Stonecreek students also participated in the delivery of meals to families designated by Oak Mountain Missions. High school students picked up the meals — each enough to feed six to eight people and consisting of turkey, sides, pumpkin pie and tea — from Publix and delivered them in person.

The salute continued at Wreaths Across America, where Stonecreek students ranging in age from 8 to 16 participated in placing wreaths at grave markers to honor those who served. Enjoy the City donated a total of $10,000, for approximately 650 wreaths, on behalf of Stonecreek. Among the participants were 11th graders Bradley Edwards and Katelyn Robinson.

“I feel pride, honor and respect for the men and women of the United States military and I’m honored and thankful to have participated in the ceremony,” Edwards said. Robinson described the experience as “important and humbling.”