COLUMBIANA — Shelby County Judge Hub Harrington, who recently announced his plans to retire in February, is tight-lipped about who might succeed him on the bench. 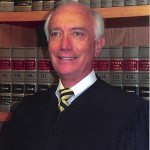 “I don’t get to pick, so I’m going to stay out of it,” Harrington said. “I don’t know who might apply, but I’ve heard a couple of names.”

The Shelby County Judicial Commission is scheduled to meet Jan. 6 to start the application process and establish deadlines for prospective candidates. The commission will interview applicants and select three candidates whose names will be submitted to Gov. Robert Bentley for consideration. Bentley will select one of the three candidates.

“It shouldn’t take long,” Harrington said the application and selection process. “After the first of the year, when the commission starts taking applications, we’ll see who might really be interested.”

Harrington, 65, will retire effective Feb. 15, 2014, after 12 years on the bench. Since announcing his plans, Harrington and his secretary, Metha Vickers, have stayed busy combing through court dockets in an effort to make a seamless transition for Harrington’s successor.

“We started going through every case, trying to see which ones are active and which ones are not,” Harrington said. “We’ve whittled away quite a few cases and I think we’re in pretty good shape.”

Harrington’s post-retirement plans include returning to private practice, providing services as a mediator, arbitrator, private judge and special master. The former — and first — mayor of Indian Springs Village also plans to rekindle his interests in horseback riding, sailing and perhaps take up a few guitar lessons.

“I have all kinds of things I want to do when I’m not living [at the courthouse],” Harrington said.

Still, Harrington says he will miss his home away from home and the camaraderie among colleagues.

“It has been a wonderful experience and I’ve really enjoyed dealing with the people and the lawyers. Being in this courthouse is not only a great honor; it’s really good to come to work.  But I won’t miss the case loads and I won’t miss the divorce cases, rest assured.”

Harrington continued: “I have to say I’m tired. It’s time for some new blood to come in here and take over. There will be a new sheriff in town and everything will be fine.”

Alabaster will hold an open house at the city’s new administration and court building on Dec. 30-31. (File) By NEAL... read more