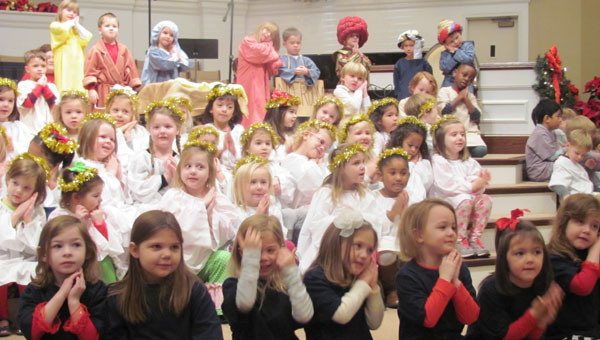 The sanctuary at First Baptist Church of Alabaster hosted the church’s annual kindergarten Christmas production. The annual program was held on Wednesday, Dec. 18th in front of a large and appreciative audience.

The program, which portrayed the true meaning of Christmas and was based on traditional Christian principles, was performed by the K-4 kindergarten students. They had various roles portraying shepherds, angels, stars, donkeys, lambs, wise men, innkeepers and of course, Mary and Joseph.

The book “This is The Star” was quietly listened to as each group of actors did their parts according to the book. The book was read by Chalane Tucker. The music portions of the production were directed by Alanna Lawler.

First Baptist has more than 140 3, 4 and 5-year-old kindergarten students and employs 23 teachers and other administrative staff. Retired teacher Sharon Dillahunty was there to help as she has for so many years, along with a host of other volunteers.

Original founders of the First Baptist of Alabaster kindergarten program Jett Edwards and Stella Seagle probably could not have imagined how their program would grow in the 45 years it has existed. First Baptist kindergarten has been run by Caroline Fulmer for 33 years now. Pre registration is in February if you are interested in this early education facility. Field trips, special recognition ceremonies, celebration of holidays, special programs and graduation make for a busy year.

Benny Cunningham has helped to shape the lives of hundreds of Kingwood Christian School students over the years. (Contributed) By... read more