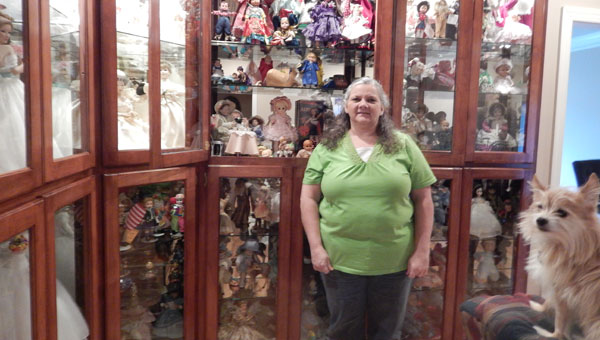 Traveling to Third World countries with her work as an adult, Debbie Pope added several prized dolls to the collection she began as a teenager living in a foster home. (contributed)

The first time Debbie Pope recalls getting a doll for Christmas, she was 8 years old and living in her first foster home. It was a Barbie doll, she recalled, and although she no longer has it, she has over 300 to take its place.

Debbie was 10 when she was put in a children’s home in Talladega. But as an adolescent, trying to learn who she was as neither child or adult, she became rebellious and began running away.

At age 15 she was sent to live again with her mother and stepfather, but found that problems there had not changed. She called her former foster parents, who were Christians, and went to live with them. They eventually adopted her.

“I was 15 when I got saved and began getting myself straightened out.” she said. She finished high school, received scholarships and earned a two-year college degree.

Working for World Council of Credit Unions, she traveled to several third world countries where the Council set up credit unions to help with the country’s economy. She works for a different credit union now but still treasures dolls she bought in places like Russia, Poland and Africa.

For Debbie, each doll has its own story, which she enjoys recalling and sharing.

“Soon after I was saved,” Debbie said, “Someone told me, ‘Joy is an inner peace, a happiness in the spirit that only comes from a positive encounter with God.’”

She has found this to be true, she said. She doesn’t dwell on the past, but stays busy with happy things, like finding dolls for her collection, sewing for family and friends, and her large family.

Debbie and husband Charlie have five children, 10 grandchildren and look forward to having them all for Christmas. She has the most wonderful mother-in-law in the world, she said, who lives right next door.

“We have (family) Christmas dinner over there, then all our kids come over to our house,” she said.

How can a Christian home filled with dolls, and grandchildren ages eight months to 13 years, be anything but joyful at Christmastime?