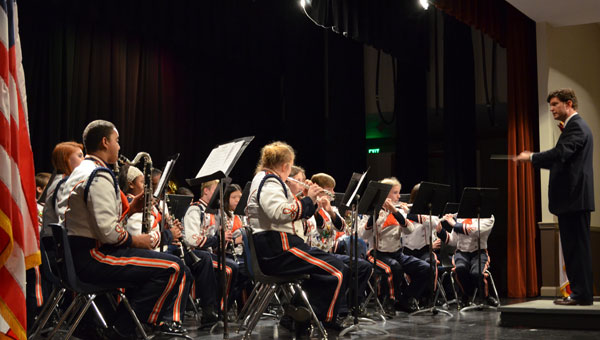 The Christmas concert presented by the Montevallo High School Symphonic Band in early December exemplified the winning tradition of the Marching Troubadours. Led by Band Director Perry Lawley, student musicians entertained their audience with a number of arrangements, including “A Christmas Trilogy” and a unique blending of “Carol of the Bells/Greensleeves.”

“We worked really hard and had a lot of fun during the concert,” freshman saxophonist Marshayia Harris said. “We weren’t perfect, but we were able to do something new and challenging.”

On display at the concert were the same commitment, dedication and determination among band members, which helped to garner success throughout the year. At each of the three competitions the Marching Troubadours attended, they won superior ratings, achieved best in class commendations and scored in the top five of all bands in attendance.

“I feel a lot of pride toward our band students and their accomplishments,” Lawley said. “They make the magic. They are the ones who perform and make it all happen. Seeing the progress and eventual success is just a joyful experience for me. I am immensely proud of the students and their perseverance to improve and do their best.”

That perseverance was evident from the inclusion and impressive performance of the march “Boys of the Old Brigade” by W. Paris Chambers. Lawley introduced the piece to the audience, prefacing the performance with an explanation of how different and demanding the piece was for the students, but they practiced diligently to be ready to perform.

“Because I had to get used to the tempo, the march was an extremely difficult piece, but it was a rewarding and fun experience to play,” Harris said.

The Marching Troubadours are a special group for Lawley, since he is an MHS graduate and former Troubadour himself. He sought the opportunity to return to Montevallo to share his love of music with students.

“It seems that each day a different study is published on the benefits of music education for students,” Lawley said. “The practice of music instills self-discipline and self-esteem, develops poise and confidence, cultivates an appreciation and love for the arts, and in the end, produces productive, better-informed citizens.”