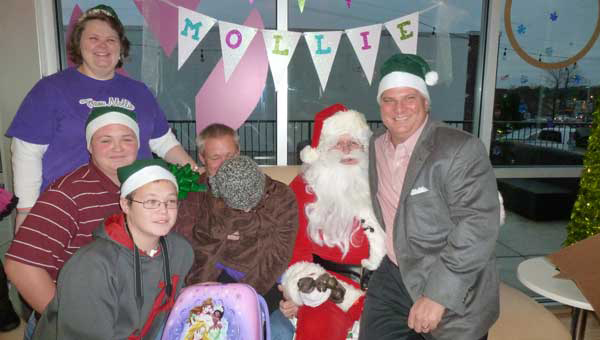 Mollie Wilder asked Santa for a special wish this year – to go to Disney World with her family.

The Wilders – parents Scott and Reneé, brothers Stephen and Austin, and daughter Mollie – had planned to go on a vacation when Mollie got sick. She began experiencing debilitating headaches in August 2013, which were symptoms of a malignant tumor on her brain stem.

Instead of starting fifth grade at Wilsonville Elementary, 10-year-old Mollie had major surgery to remove the tumor. Unfortunately, the surgeons could not get it all. After recovery, she had radiation and will begin chemotherapy in January 2014.

Her Disney World wish made it to the wish makers at Magic Moments, a non-profit organization established to fulfill the dreams of critically ill children with life-threatening illnesses. At the same time, the employees at Medical Properties Trust, Inc. wanted to grant a wish as a combined 50th birthday present and 10-year business anniversary present for Edward Aldag, Jr., chairman, president and CEO of the company.

“The timing was perfect,” said Anna Scalici, special events and outreach of Magic Moments. “Medical Properties employees donated the funds for the Wilders to stay a week at Give Kids the World Village in Kissimmee, Fla., a non-profit resort for critically ill children, medically equipped for their special needs, and their families. They will visit Disney World, Sea World and Universal Studios at a time of their choice. They also have tickets to go to the movie Frozen.”

Mollie was greeted at Yogurt Lab in Vestavia by family, friends, Medical Properties employees and Magic Moments board and staff. Santa opened a suitcase with a letter from Mickey Mouse telling Mollie that her wish had been granted.

“There are still good people in this world,” Reneé said. “Mollie is very overwhelmed. We are so blessed and thank you so very much.”