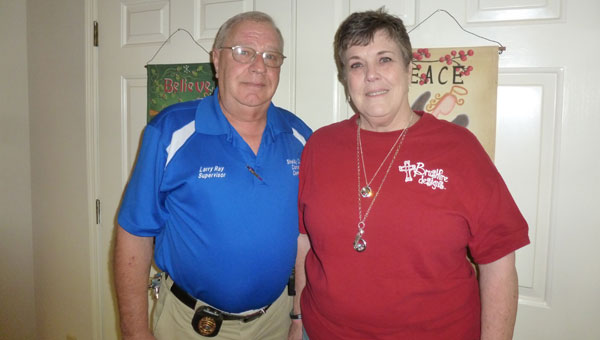 Larry Ray, security supervisor of Shelby County Community Corrections, and Sallie share their love and memories for their special needs daughter Wendi who died one year ago on New Year’s Eve. (Contributed)

Wendi Ray was born three months premature on May 28, 1972 to Sallie and Larry Ray of Fourmile. Slow to walk and talk, the Rays learned their baby had Down syndrome at age 1. Life forever changed that day.

“We made two decisions,” Larry said. “First, we would never go anywhere or do anything that Wendi could not do. And second, we would see to it that she got an education. The state had just mandated that all children could receive a public school education. Wendi was one of the first special needs children to be mainstreamed in Shelby County. When Wendi graduated in 1991 from Shelby County High School, the feelings were simply indescribable.”

Wendi had a special, close relationship with her younger brother Daryl, was was born in 1978.

“Daryl was Wendi’s hero,” Larry said. “She was very involved in the Special Olympics and won many medals in track and field, swimming and bowling. She was so competitive. She was chosen to be the spokesman for Athletes for Outreach for Special Olympics fundraisers and Daryl stood beside her while she said her speeches.”

“I was so proud of my sister,” Daryl said. “Nothing slowed her down. She had a ‘can do’ attitude and did not know defeat. She was a good encourager and always proud of what she accomplished.”

For her 40th birthday, Sallie and Larry gave Wendi a surprise party at their church, Bethel Baptist, complete with BBQ, Elvis and 175 guests.

“She never met anyone she did not love,” Sallie said. “She made me a stronger person for her love of God. Her life was lived by the Special Olympics oath: ‘Let me win, but if I cannot win, let me be brave in the attempt.’”

Two months after her 40th birthday, Wendi was diagnosed with breast cancer.

“My Wendi was a trooper,” said Sallie. “She was so brave all through her cancer.”

On Dec. 31, 2012 Wendi left her earthly home when she developed septic pneumonia, surrounded by her family and close friends.

“God put Wendi here for a purpose,” said Larry. “She accomplished it and now she has gotten her award.”

First Marine Group in Afghanistan has a DAR Christmas