Suspect’s bond revoked after he allegedly came to court high

A 19-year-old Alabaster man who was arrested in July and charged with distributing marijuana from his residence is back in jail after he allegedly violated his bond. 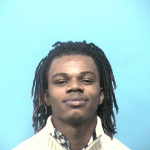 Skylar Domnik Ford, whose address is listed in the 100 block of Forest Parkway in Alabaster, originally was arrested by the Shelby County Drug Enforcement Task Force on July 13 on two felony counts of unlawful distribution of a controlled substance and one misdemeanor count of possession of drug paraphernalia.

According to his arrest warrants, Ford allegedly distributed marijuana from his residence on May 29 and June 4. He was released from the Shelby County Jail on bonds totaling $21,000 two days after his arrest.

However, Shelby County Circuit Court Judge Dan Reeves revoked Ford’s bond after Ford allegedly showed up late to the Dec. 19 hearing and tested positive for THC – a psychoactive ingredient in marijuana – according to court documents.

He currently is being held in the Shelby County Jail without bond pending a Feb. 6 hearing, according to court documents.