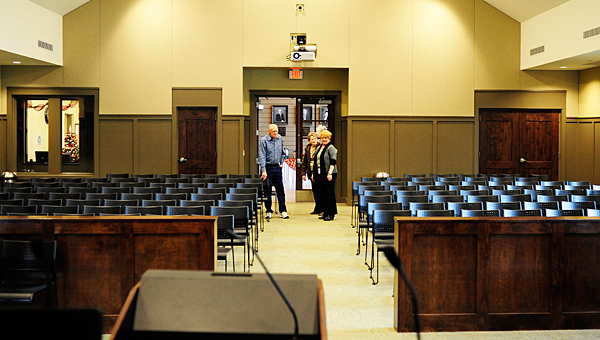 Though they passed by it nearly every day, Alabaster YMCA employees Carol Hamilton and Rhonda Elmore had not gotten a chance to see the inside of the new Alabaster City Hall before Dec. 31.

“I think it’s beautiful,” Elmore, the Alabaster YMCA’s executive director, said after an about 45-minute tour of the new City Hall on the old Siluria Mill site.

“I think it’s a great representation of Alabaster – just where it is and the history behind it,” Hamilton, the YMCA’s membership director, added.

Elmore and Hamilton joined several others in taking tours of the new City Hall on Dec. 30-31, giving the city a chance to publicly showcase its newest addition, which opened in late September.

During the tours, visitors got a chance to view the new large court and public meeting room, the city’s administrative offices and Building Services department. The Alabaster Board of Education, which occupies the building’s second floor, was closed for the Christmas and New Year’s Day holidays.

On the morning of Dec. 31, Alabaster Mayor Marty Handlon and her assistant, Beverly Baker, guided Hamilton and Elmore through the new facility, explaining the building’s layout.

Handlon said the building allows the city’s offices to operate more efficiently, as it consolidated offices previously spread out over several buildings into a single facility.

Handlon said the city held the open house sessions to allow city residents to tour the facility when they otherwise may not have.

“A lot of people feel like if they don’t have any city business, they can’t come to City Hall,” Handlon said. “But everyone is always welcome.

“We really wanted to have a grand opening in September, but like any other building, there were some punch list items we still had to address,” Handlon added. “You only get one opportunity to make a first impression, and we would have hated to not have everything in place.”

Flying? You may soon need a STAR ID

The Department of Public Safety is issuing STAR ID cards at license offices in Pelham (pictured) and Columbiana. (File) By... read more