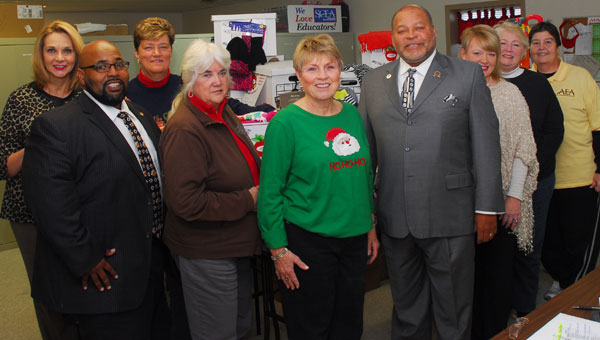 Members of the Shelby County and Alabaster education associations collected nearly 1,400 items to donate to local children in need during a recent donation drive. (contributed)

It wasn’t easy hearing longtime Montevallo school bus driver Kenneth Dukes’ stories when I went to visit him and several other local teachers in late December.

“It’s so hard to see a child waiting in temperatures like we had this morning without gloves, without a hat, without a coat,” Dukes, who has been running his school bus route for 26 years, told me. “They’ll say ‘Oh, it’s not cold outside,’ or ‘I just forgot my jacket.’ But you know that they just don’t have one.”

For years, Dukes has helped children on his bus route who have been unable to afford items such as coats and gloves. For the past several months, his peers in the Shelby County School System and the Alabaster City School System worked to combat the problem for children throughout the county.

When I arrived at the Shelby County Education Association’s office in Alabaster that day, I was blown away when I saw the enormous pile of items ranging from socks, scarves, jackets and gloves sitting on a table in the middle of the office.

The day marked the celebration of a very successful partnership between the Alabaster and Shelby County education associations, during which current and former educators from both school systems worked to collect donations for area kids who may not even have a jacket to wear when the temperatures dip below freezing.

The two school associations collected a total of about 1,400 items to benefit children in need in only two weeks, which is nothing short of amazing. After collecting the items at the Alabaster office, the education associations donated the items to Shelby Emergency Assistance, the King’s Ranch and Hannah Home charities.

I was very impressed that the two education associations did not miss a beat after splitting into two associations with the formation of the Alabaster City School System last summer.

“I hope we as educators can set an example that our school leaders can follow with the idea of collaboration,” retired Thompson Intermediate School teacher Kathy Kilpatrick said.

I couldn’t have said it better myself.

‘Be sure to call your mama:’ Bryant’s words still ring true today [COLUMN]

By DREW GRANTHUM/Sports Writer Arguably one of the greatest commercials in history was a bit that involved beloved (depending on... read more