Eighth and 10th grade students in Shelby County Schools scored at or above the national average in two college-readiness tests.

Shelby County Schools administrators recently received the results for EXPLORE and PLAN, which test eighth and 10th students, respectively, in four categories: English, reading, math and science. The tests are precursors to the ACT, a national college-readiness exam students take in 11th grade.

“Each one of those subject areas has a benchmark score that says if students meet or exceed that score, they are on track to be college-ready,” he said. 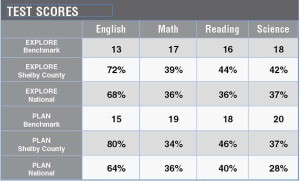 While Shelby County’s students are performing at or above the national average, Cook and Mohon said there is still room for improvement.

The Alabama Math and Reading Test has been phased out, and Explore and Planwill be offered for the final time in October 2014. The tests will be replaced with ACT Aspire, which will be given to third-eighth grade students in May and 10 grade students in the spring of 2016.

“We’ll (have) a vertically aligned assessment system,” Mohon said. “Literally as early as the third grade, we can start tracking students’ progression towards those college-readiness benchmarks as measured by the ACT in the 11th grade. That is absolutely huge.”

Mohon said the early intervention is important in order to help struggling students.

“A lot of the research by ACT shows that if students are not on track toward meeting or exceeding those college-readiness benchmarks by the end of eighth grade, by and large they are never going to get it,” he said.

Shelby County Schools have begun offering other tests throughout the year to gauge students’ mastery and understanding of subjects. These formative assessments are given several times throughout the school year to track students’ progress. Teachers receive immediate feedback and can target students’ weaknesses based on the scores.

These testing changes go hand-in-hand with implementation of the Common Core State Standards, a nationwide initiative that sets baseline standards for what U.S. students should know in math and English at the end of each grade. The state of Alabama adopted the Common Core standards in 2010 and added its own standards.

Last year, the state of Alabama retired the high school graduation exam in favor of the ACT.

“This year for the first time ever all 11th grade students will take the ACT free of charge in their schools,” Mohon said.

Mohon said the new assessments are more rigorous. Previously, students had to demonstrate they could answer a question or solve a problem. The new tests require students to demonstrate understanding of the concepts as well. Students will also be asked to master some skills earlier.

However, raising the standards may result in lower scores for county students.

“That’s been part of our message to parents. With more rigorous standards and more rigorous assessments, we may see a slight decline in scores,” he said. “That’s not necessarily a bad thing.”

Mohon said the new standards will help prepare students for life after high school, whether that is at college or in the work force.

Cook said school officials expect to see a drop in ACT test scores this year as well, since all students will be taking the test in April. Previously, only students who planned to apply to college took the test.

“We do know we’ll have some kids who do not want to take the test, who are going to draw sailboats. We’re expecting a little dip because of that,” she said. “Motivation has a lot to do with the high school students’ performance.”

However, Cook said the expansion of the test could open doors for some students.

“Hopefully it will identify some students who might have the potential to go on to college that we can provide some resources to, network for them to help them follow their path,” she said.