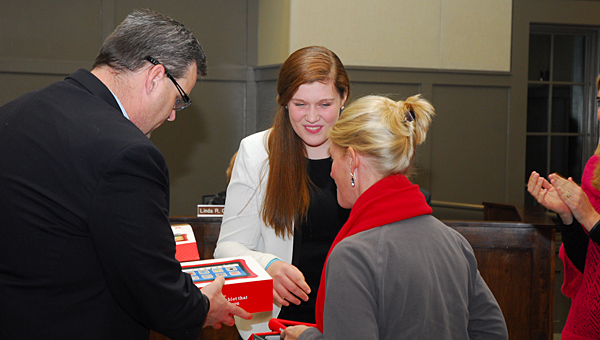 When Thompson High School junior Katelin Molan saw some of her special-needs peers being picked on by other students two years ago, she decided something needed to change.

Molan, who then was in her first year at a public school, knew there was little she could do to change the mindset of some of her classmates, but she knew she had to do something to show her support to the school’s special education department.

“You can’t change the way some people think, but you can change the environment,” Molan said before a Jan. 15 Alabaster Board of Education meeting. “That’s what we wanted to do.”

Seeing her peers being bullied sparked action among Molan – who then was only 14 – and her friends. Shortly after the incident, Molan formed a nonprofit organization called “His Special Hands.”

Through His Special Hands, Molan began selling items in the community such as bracelets, guitar picks and ponytail holders.

“It has basically been two years of nonstop fundraising,” Molan said. “I wanted to keep everything focused on God, because I believe these children are gifts from God.”

Selling the small items throughout the community proved successful for the organization, but Molan was determined to raise enough money to make a lasting difference in the THS special education department.

As her 16th birthday approached, Molan said she decided to forego a celebration focused on her and instead hold an event to raise more money for the organization.

“We held a car wash to raise money, and that was my 16th birthday,” Molan said. “After that, we had enough money to buy these two tablets.”

Through the fundraisers, His Special Hands was able to purchase two tablets designed to run educational software to donate to the THS special education department. Each tablet is wrapped in a protective rubber case, ensuring it will last many years at the school, Molan said.

“This is an outstanding event,” said Alabaster School Board President Adam Moseley. “When you’ve got someone who starts a nonprofit to give back to our schools, that’s incredible.”

“I want to tell you how proud I am of you,” Alabaster School Superintendent Dr. Wayne Vickers told Molan.

Although Molan said it “was like a dream come true” to make the donation to THS, she said she does not plan to stop fundraising for Alabaster’s special-needs students.

“I want to put two tablets in every Alabaster school,” Molan said. “We are just starting at the high school and working our way down.”