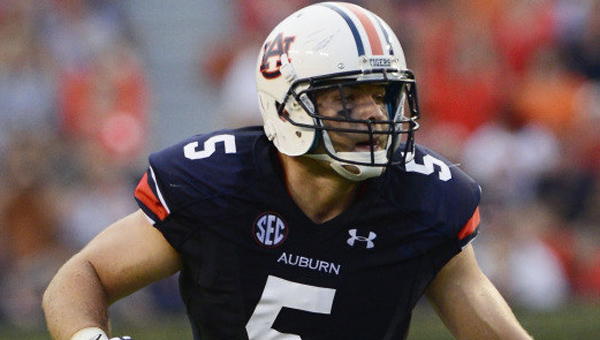 When it comes to college football, Jake Holland has just about seen it all.

From capturing a national championship ring with Auburn University his freshman season, to failing to win a single Southeastern Conference game in 2012, to making it back to the title game this season, the former Pelham Panther has had an interesting ride his four years on the Plains.

As the 2009 Shelby County Reporter Player of the Year, Holland inked a scholarship to play for then-Auburn coach Gene Chizik in February 2010.  As a freshman, Holland saw action in eight games, where he registered a sack and 12 total tackles in the linebacker position as the Tigers captured the 2010 BCS National Championship.

“My freshman season set the tone,” he said. “Your first year as a college athlete, your eyes are wide open. You try to keep up with the pace.”

The team’s execution in winning the National Championship made a huge impression on the younger players, Holland said.

“It really set the tone on how to do things right,” he said. “It was exciting to come in and win the championship. It was something to experience.”

Unfortunately, Auburn struggled the next two seasons, going 8-5 in 2011 before a disastrous 3-9 campaign in 2012 that saw the Tigers go winless in SEC competition.

“We changed staff, and it just didn’t work out,” Holland said. “Going from (the championship) to the next year, it just wasn’t enough. We wanted to bring Auburn back to (greatness).” Chizik was dismissed as head coach after the 2012 season, and in his place former Auburn offensive coordinator Gus Malzahn was hired.

“We said, ‘(Things) are going to have to change,’” he said. “(We) started training hard in the offseason.”

The hard work paid off, as the Tigers marched their way through the SEC. They went 11-1 overall and 7-1 in the SEC, including two miraculous last-second victories over rivals Georgia and Alabama.

After capturing the SEC title over Missouri, the Tigers found themselves in Pasadena playing in the BCS National Championship game against the No. 1-ranked Florida State Seminoles. While the Tigers came up short of winning a title, Holland said he enjoyed the experience of playing in the Rose Bowl.

“The Rose Bowl is a great place,” he said. “It was my first time to be out there. It was just a fun time.”

From Ned Bearden Stadium in Pelham to the Rose Bowl, Holland said he felt his career was a reflection of the strength of the Pelham athletic department.

Holland went on to say he hoped he would be remembered as a hard worker on and off the field.

“I hope people understand how much hard work (gets) put in,” he said. “Things haven’t always gone my way, but I pushed (forward).”

By TREY HICKMAN/For the Reporter WEST BLOCTON — Points came very much at a premium for the West Blocton varsity... read more