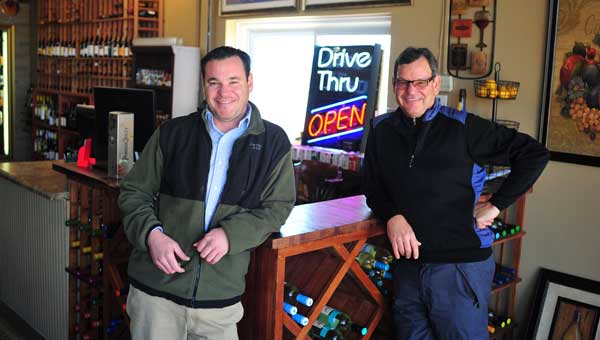 By LAUREN HEARTSILL DOWDLE/For the Reporter

CALERA – Calera residents can now buy alcohol and cigarettes without getting out of their car. The first drive-through liquor store in the state, R&R Wine and Liquor, opened on Highway 31 next to Subway and Publix in November 2013.

While most visitors prefer to come in and browse the selection, many of the repeat customers take advantage of the drive-through option, he said.

“It’s really just about the convenience,” Rourke explained. “If they know they can go to a drive-through, instead of having to go inside a store, I think they’ll turn to us.”

In addition to saving customers time, having the drive-through also provides another level of safety for the R&R workers.

“After dark, the employees could lock the door and just use the drive-through,” said Rourke, who previously worked at Iron Horse Café.

There’s no state law against drive-through liquor stores, but Rourke did have to get approval from the city before opening the business.

“It helped that the building used to be a dry cleaners and already had a drive-through,” said Rourke, who owns the business with his father, Robert.

“We should have all of your needs,” he said.

R&R Wine and Liquor is open from 10 a.m. to 9 p.m. Monday to Wednesday and then until 10 or 11 p.m. Thursday through Saturday, which are their busiest days.

“It’s a family-owned business and a one-stop shop,” Rourke said. “We try to get everything for everyone to be local and convenient.”