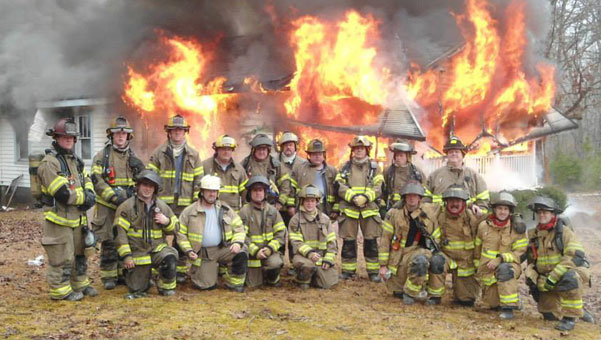 “They won’t waste a bit of chance to practice,” pointed out Bill Robertson, director of Chelsea’s Citizen Observer Patrol.

From the corner of the Liberty Baptist parking lot, we watched the Chelsea Fire Department prepare for a training exercise. They carried lumber, pallets and more into the old Taylor house across Shelby County 47.

“The house was built about (1948),” said Wallace Blackerby, whose uncle built it with help from the community. “Back then, neighbors just helped each other out, a house raisin’ they called it.”

The live fire exercise was held on Jan. 10, but soon a new community center will be built where the house once stood.

“When this property became available, the City Council thought it was a prime location,” said Chelsea City councilwoman Juanita Champion. “Bids will soon be let. We hope for completion in 2016, but for now the fire department gets practice.”

“We have to replace the ‘fire load’ with wood materials to simulate furniture,” said Capt. Mark Rikard, explaining why wood was being carried into the house. “We are not allowed to burn synthetic materials, like sofas and mattresses, in a live burn because of the toxins released.

“We stage a one room fire, as if it were in your kitchen or bed room. We let it roll up until the room is fully involved. Teams go in, execute a search pattern, find it and extinguish it,” he added.

“It’s pitch black and extremely hot,” he said. “You’re on your knees, crawling. You hear the fire crackling and you go toward it. When it gets hotter you know you’re getting close.”

“This was a great opportunity, we don’t get often,” Chief Wayne Shirley said. “We always prefer to prevent fires instead of putting them out, but, we must keep on top of our game for when we are needed. You can’t replace the training you get from a ‘Live Fire’ environment.”

Chelsea is fit for fitness