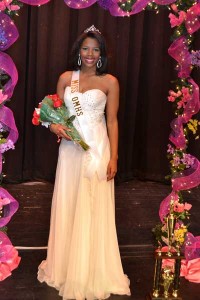 Taylor is an honor roll, dual enrollment student. She has served as vice president of the Oak Mountain Masters and enjoys giving tours and providing information about OMHS, according to a news release.

Taylor has served as a peer assistant for three years and enjoys mentoring incoming freshman. She recently created a brochure, “Neglected and Abused Children,” which will be used as an educational tool for the peer assistants.

“Students are perfectly position to recognize and report neglect and abuse,” Taylor said in the news release.

Taylor is Girl Scout and a member of Troop 2280. When it was time to pursue her Gold Award Taylor knew exactly what project she wanted to lead.

“I have recycled phone books since I was a Brownie, and I wanted to expand my personal project to include my community and school,” she said in the news release.

Taylor set a goal, formed a team, wrote and received a community grant and was able to place a blue recycle bin in every classroom. She has written another grant and hopes to add plastic and aluminum to the program prior to graduation.

Taylor has been a member of the Starlette dance team, UDA All Stars, and is a part of the competition team at the Pointe Dance Arts studio.

Taylor was presented as a 2013 Starlight debutante and a top 10 finalist in the Miss Alabama Outstanding Teen pageant. She was a finalist, talent and self-expression winner and overall second alternate in the 2014 Shelby County Distinguished Young Woman program.

“When I was younger, I was extremely shy and struggled with communication,” she said in the news release. “I hope to one day play a role in making it easier to communicate, especially for children.”

FROM STAFF REPORTS Shelby County Schools will remain closed on Wednesday and Thursday, according to a news release. “Teachers and... read more