On Feb. 9, 2014 at 5:30 p.m., the Emmanuel Temple Holiness Church Drama Team will present its second-annual black history drama, “The Cry of a Black Slave, Struggling for the Dream.” 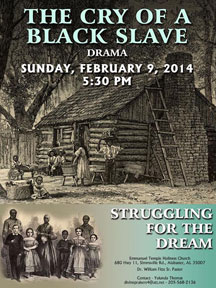 Last year’s production was performed by Emmanuel members only. This year’s spirit-filled drama includes not only members from Emmanuel, but also from Apostolic Way of Life, Bethesda Apostolic Worship Center, Greater Hope by Faith, Spirit and Truth, Church of the Highlands, Grace and Truth and Present Truth Tabernacle.

“Our focus this year was to get other churches involved and be unified with different races and religions to realistically depict our past society,” said Yolanda Nabors Thomas, writer and director of the Praise Dance Team.

She and Kennedy Cooper, co-director of the Apostolic Way of Life ministry in Saginaw, will not only direct the play, but will be actors as well.

The cast of 35 participants have been practicing since early December (writing and planning began last August). Four Thompson High School students, two Calera students and Alton Doyle, recent founder of “Man Up for Breast Cancer” will be involved, as well as other various church members.

There will be five scenes in the drama – Slavery, Emmett Till, Bombing of 16th Street Baptist Church, Martin Luther King, Malcolm X and the final scene: Chains. A real funeral scene with Good Shepherd Funeral Home directing will be featured.

“This heartfelt drama portrays the struggle and triumph of African Americans during slavery,” Thomas said. “Our conviction is to unify our communities regardless of race and religion to take a look back at our once troubled society to our future generations.”

The public is invited. Doors open at 5 p.m.