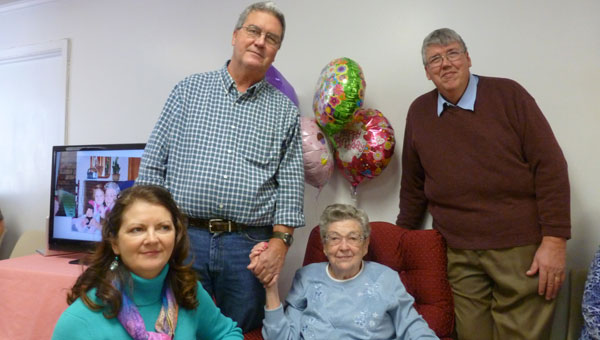 “My parents fell in love at first sight,” Miss Emmie said. “Mama was sitting on a log and Daddy rode by on a horse and that was it. They married on Dec. 7, 1913. I have three older brothers. I was the baby and only girl.”

“My daddy was building new steps on the church when they told him I was coming,” Miss Emmie said. “He dropped his tools and ran home when I was born on Jan. 21, 1924. The church was 100 years old that year, one of the oldest Baptist churches in Alabama. My great grandfather W. W. Armstrong was the fourth pastor of the church.”

Miss Emmie became engaged to Dewey McDonald while a senior in high school. She graduated from Shelby County High School on June 2, 1942, and they married on June 18, 1942.

Dewey was an instrument mechanic at a gun powder plant in Childersburg. Miss Emmie worked for the Shelby County School system, where she retired as the lunchroom manager at Elvin Hill Elementary School. Dewey died on June 4, 2004. They had three children, Randy, Tommy and Nancy, five grandchildren and nine great-grandchildren.

“Miss Emmie has been very active and is a vital part of this church,” Brother Roger Chambers said. “Although I have only been pastor three years, Miss Emmie is vital to this church. She is a pillar of this community.”

“She is such a godly, loving person,” said church member Frieda Perry. “Miss Emmie has touched so many lives. She is kind, sweet, always giving and usually no one knows. Words cannot describe how wonderful a person she is.”

By PHOEBE DONALD ROBINSON/Community columnist The Celebration of the Shelby County Arts Council fashion show plans to appeal to all... read more