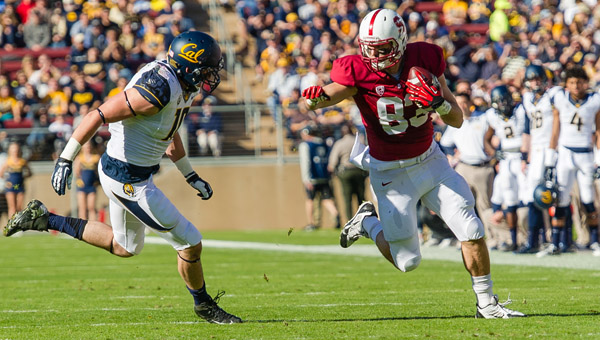 Davis Dudchock during Stanford’s game against Cal. The former Oak Mountain star wrapped up his career at Stanford with an appearance in the Rose Bowl. (Contributed/StanfordPhoto.com)

It’s a phrase that’s found its way into the American vocabulary, encouraging the young to pursue the opportunities the west has to offer.

Dudchock, a highly-touted recruit in the graduating class of 2010, signed a scholarship with Stanford University to play for then-head coach Jim Harbaugh. Four seasons later, and Dudchock’s career at Stanford came to a close with a 24-20 loss to the Michigan State Spartans in the Rose Bowl. While the loss wasn’t the end he hoped for, Dudchock said he enjoyed every moment of his time at SU.

“It’s been an incredible experience,” he said. “I’ve been blessed to play with some awesome players.”

While at Stanford, Dudchock called players like current NFL stars Andrew Luck, Richard Sherman and Doug Baldwin teammates. While his senior season had ups and downs, Dudchock said the team capturing the Pac-12 championship was huge.

“We had a good year,” he said. “(Losing in the Rose Bowl is) certainly not what we wanted. The ultimate goal is to win the conference,  (but we) simply didn’t finish the job. Michigan State made the big plays.”

“Playing in the Rose Bowl is unbelievable,” he said. “It’s one of the top venues in all of sports. I’m never going to forget it.”
In addition to earning a Pac-12 All-Academic Team honorable mention, Dudchock netted three catches for 24 yards in a win over Notre Dame on Nov. 30. At season’s end, he averaged 8.6 yards per catch for the year.

While many local athletes opt to play for schools closer to home, Dudchock said he was glad he chose to travel to California to pursue not only athletics, but education.

“Coach (David) Shaw established (Stanford) as a prominent place to play,” he said. “Balancing athletics and academics at Stanford is challenging. (It) pushed me to grow intellectually. It’s a source of pride.”

He went on to say that no matter if he never played another snap of football, he was happy with his career, from Oak Mountain to Stanford.

“(My) goal is to stay on track to graduate in June,” he said. “I’m so glad (Coach Harbaugh) gave me the opportunity. (There are) not many guys from Alabama at Stanford. It’s changed my life.”

Ashton Kupferburg looks for a pass while Jana Armstrong (No. 48) guards in the Univeristy of Montevallo College Night women’s... read more