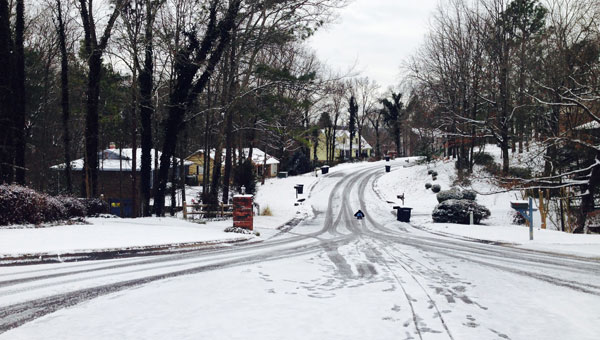 I wasn’t particularly put out by the freak snow attack on Jan. 28. I was in traffic for a few (six!) hours, sure, but nothing life threatening. I even made it home in time to watch my little lab puppy experience snow for the first time—she, for the record, found the snow delightful.

It wasn’t until the phone calls, emails, and Facebook posts with stories of all the stranded motorists flooded in that I realized the severity of the situation.

That’s also when I realized how many wonderful people were stepping up to help.

I’m a Southerner, born and raised, so I know a little bit about hospitality. However, it never ceases to amaze me how selfless people respond to bad situations.

From Salvation Army Lt. Jamie Leonard who cooked dinner for everyone at the hotel she was staying in after being stranded on I-65 to the many wonderful teachers who took care of children whose parents were unable to reach them, the outpouring of generosity from this community was truly amazing.

The ice is mostly gone now and just a few stubborn patches of snow cling to the ground, but I don’t think that this winter event is soon to disappear from many minds.

Just like the infamous blizzard of ’93, the surprise snow of ’14 proves that Alabamians actually do know a thing or two about winter weather, even if it only comes once a decade. Moreover, we know how to make the best of a bad situation.

I am always completely thrilled to even just a few flakes of snow. I take pictures, scrape remnants to make snow cream and have joined many a snowball fight that is mainly dirt and slush.

This years’ snow, however, satisfied my snow cravings for quite a while.