100 years old and ‘still figuring it out’ 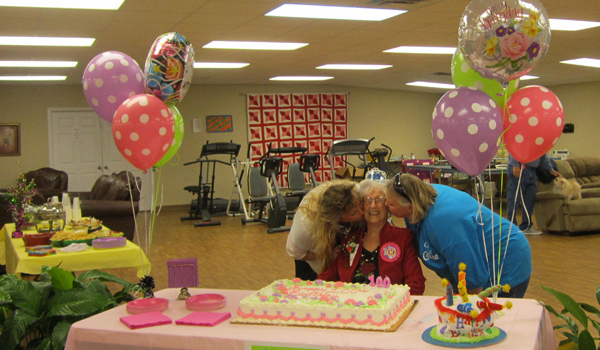 CALERA—Frances Degroat—Ms. Frances to almost everyone—is a celebrity at the Calera Senior Center, and quite a crowd gathered on a rainy Wednesday, Feb. 5, to celebrate her 100th birthday.

There were decorations, cake, snacks, punch and a tiara for the birthday girl.

Bo Robertson, manager of the Calera Senior Center, said Degroat was a very active member of the senior center prior to her move to Chandler Health nursing home in Alabaster.

Ms. Frances was the youngest of five girls born to Scottish immigrants, the only child born on American soil. Ms. Frances has survived three husbands: She was married to Raymond Beavers for 43 years, Evan Jeffers for 11 years and most recently Tom Degroat, who died of terminal bone cancer 11 months after their marriage.

At the senior center’s very first prom, Degroat was elected prom queen. Wilie Donald, the night’s prom king, said he and Mrs. Frances had a great time together.

“We danced a couple of dances,” Donald said. “We had a good time.”

Degroat remembered everyone who came up to give her a hug and birthday wishes, often remarking “Who could forget you!” to her old friends.

As for being a centenarian, Degroat said that she is “still figuring it out.”

Pelham may OK refunds of some winter storm towing fees

The Pelham City Council is considering a resolution to allow for refunds of towing fees for some vehicles towed during... read more