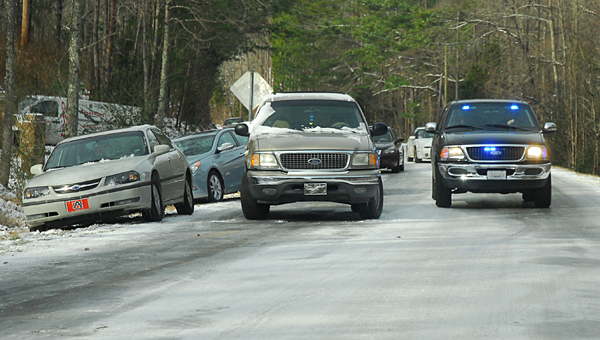 An Alabaster police vehicle patrols a frozen Kent Dairy Road on Jan. 29 as dozens of cars remain stranded from the night before. (File)

Alabaster emergency responders were able to “work around” dozens of stranded vehicles on the city’s streets without towing any vehicles during the recent winter storm, according to the city’s police chief.

Rapidly deteriorating road conditions caused thousands of drivers across the Birmingham metropolitan area to abandon their vehicles – sometimes in travel lanes – when a winter storm struck the state on Jan. 28.

Although abandoned cars littered many streets throughout Alabaster after the storm, Police Chief Curtis Rigney said the city was not forced to tow a single car.

“We had a few roads that were blocked, but we worked around it the best we could,” Rigney said during a Feb. 5 interview. “We understood that some folks were stranded in Birmingham or other places, and couldn’t get to their cars for a few days. So we gave them a little extra time to get them moved.”

Nearby cities such as Pelham and Leeds were forced to move or tow some abandoned vehicles after the vehicles were blocking major roads and were blocking access for emergency vehicles.

Pelham leaders are considering a resolution to refund towing fees for the owners of some towed vehicles.

After the winter storm hit, Alabaster emergency responders patrolled the city to look for motorists stranded in their vehicles and transport them to safety.

As the roads thawed on Jan. 29-30, most of the abandoned vehicles were moved by their owners. By Jan. 31, “only a few” stranded cars remained on the city’s roads, Rigney said.

“We were able to make contact with the few vehicles we had left on Friday, and we were able to get them all moved,” Rigney said. “We didn’t have to tow anybody.”