Pelham may OK refunds of some winter storm towing fees 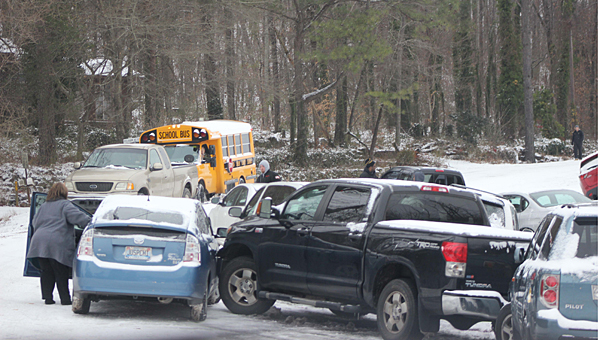 The Pelham City Council is considering a resolution to allow for refunds of towing fees for some vehicles towed during the recent winter storm. (Contributed/Ashley Williams)

The Pelham City Council during its Feb. 17 meeting likely will consider a resolution allowing wrecker companies to refund the towing fees for vehicles towed with the city’s authorization during the recent winter storm.

During a nearly three-hour Feb. 5 meeting to discuss the city’s response to the Jan. 28-30 winter storm, Pelham City Council President Rick Hayes said the council is working with the city’s attorneys to draft the resolution.

“We need to address the situation and minimize the impact on the residents,” Hayes said. “We are going to do the right thing for our residents.”

The Pelham Police Department authorized 39 vehicle tows during the winter storm from as a necessity to clear city roads for emergency vehicles, Pelham Police Chief Tommy Thomas said during the meeting.

Thomas said the city only moved vehicles as necessary to allow emergency responders to navigate the roads – particularly on Shelby County 11.

“We had to move 39 cars off the road because we could not get emergency vehicles through. There’s been a lot of controversy about that,” Thomas told the group of more than 100 Pelham residents and city employees gathered in the Pelham municipal courtroom. “We are not going to put peoples’ lives and safety at risk because we can’t get our emergency vehicles through the roads.”

Hayes said the wrecker companies would provide any towing fees refunded by the council’s actions.

“We are trying to work with the wrecker companies to take care of the appropriate charges so that they can refund the applicable individuals,” Hayes said after the meeting. “We are going through the process of crossing our Ts and dotting our Is right now. We should have the resolution finalized by the end of the week, and have it to vote on during our next (Feb. 17) meeting.”

Those who had cars towed on Jan. 30 – especially in northern Pelham – should call the Pelham Police Department at 620-6550, the Hoover Police Department at 444-7700 or Action Towing at 235-5755 to ensure the tows were authorized by the city, Pelham deputy Police Chief Larry Palmer said previously.

Calera seniors Tyler Harrell, Ronnie Clark and Jordan Bishop were among the first seniors to sign letters of intent on... read more