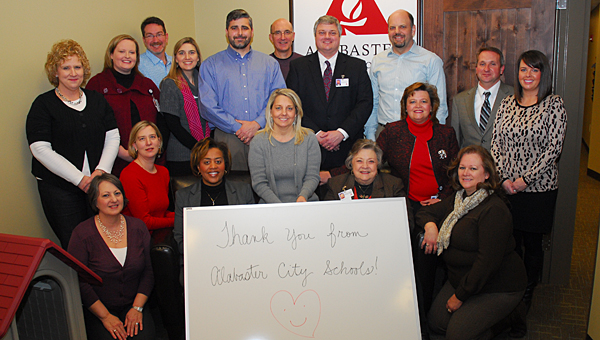 “We all worked together to ensure the kids had blankets, the medicine they needed, everything,” Atkins said of the hundreds of children stranded overnight at the city’s schools from Jan. 28-29. “We just want to say thank you to the city for everything they did.”

After the schools reported hundreds of children would be staying overnight at the schools, the city worked to make sure blankets were delivered to each school.

“We want to thank Target, because they actually donated about $200 worth of games for us to give to the kids,” said ACS Chief School Financial Officer Sarita Tapscott, noting the city also purchased blankets for the students at the store.

ACS Coordinator of Exceptional Education Keri Johnson said the police and fire departments and the Lifeguard ambulance company helped to transport children home once road conditions improved the day after the storm, including a few Alabaster students at the Linda Nolen Learning Center.

“One of the little girls from Creek View and her mother were crying because they were so relieved that she was home,” Johnson said.

Atkins said vehicles containing an ACS staff member, an Alabaster firefighter or police officer and three students made trips most of the day on Jan. 29 to transport children home whose parents were unable to reach the school.

Vickers praised the city, ACS teachers and central office staff members for putting in long hours to care for the students throughout the winter weather ordeal.

“I’m really thankful for everything the city and my staff here did,” Vickers said. “They stepped up and made it a lot better for the kids.”