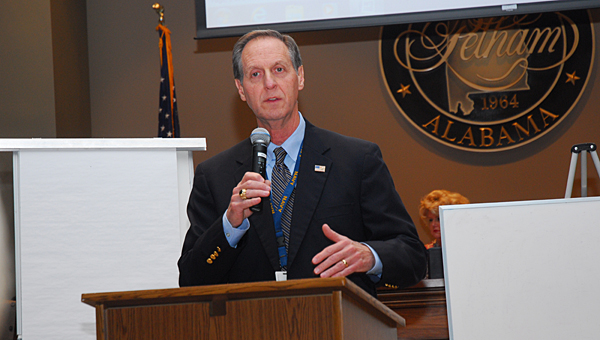 More four-wheel-drive vehicles, studded tires and items allowing for long-term response to emergency situations were popular requests among Pelham’s department heads in the wake of the recent winter storm.

The city’s department heads provided a recap of their responses to the Jan. 28 winter storm during a nearly three-hour debriefing in Pelham’s Municipal Courtroom on Feb. 5.

During the meeting, the department heads outlined challenges they faced while responding to the storm, and suggested items to help them be better prepared for a similar situation in the future.

Thomas said the department had a few surplus military Humvees and a 5-ton truck able to navigate the icy roads to transport students home during the storm, but said he would like a place to store and maintain the vehicles while they are not in use.

Thomas also requested studded tires to outfit 10 vehicles, more two-way radio batteries and chargers, winches and additional bunks and a stove at the department for officers to use while they are responding to a long-term emergency such as the storm.

Pelham Public Works Director Eddy Jowers said he would like to add a salt mix to the city’s sand supply, which would help to melt ice on the roadways, and a generator to power the department in the event of a power loss.

Pelham Civic Complex Director Danny Tate, who helped to operate an emergency shelter at the PCC during the storm, requested more mats for shelter occupants to sleep on, a generator and for security and medical staff to be stationed at the PCC when it serves as a shelter.

By GINNY COOPER/ Staff writer CHELSEA—A 29-year-old man is being held in the Shelby County Jail after being arrested by... read more