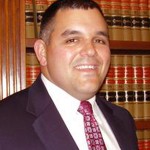 Roper, the son of a retired sheriff’s deputy and a graduate of the University of Montevallo, will face off against Daniel A. Crowson in the Shelby County Republican primary June 3.

Roper expressed concern in a news release over untimely delays within the courts “that only act to cost citizens extra time and money.”

“If punishment is warranted it should be in the judgment not the process,” Roper said.

Roper, a former probation officer, attended the Birmingham School of Law and later opened a private law practice. He currently serves as chairman of the City of Montevallo Personnel Board and is a former member of the Montevallo Zoning Board of Adjustments.

Roper is married to the former Amanda Wyatt of Montevallo and they have two children. The family attends Montevallo First Baptist Church, where Roper teaches Sunday school.

“Many people who enter the court system to resolve life altering problems become frustrated and disillusioned over delays due to overcrowded dockets. They decide to give up instead of pursuing relief. For example, a ‘short continuance’ in the court system could be four to five months. These type of delays would never be tolerated in the business world,” Roper said.

“When elected, I pledge to use judicial knowledge and a business-like ethic to bring timely and effective justice to the citizens of Shelby County.”