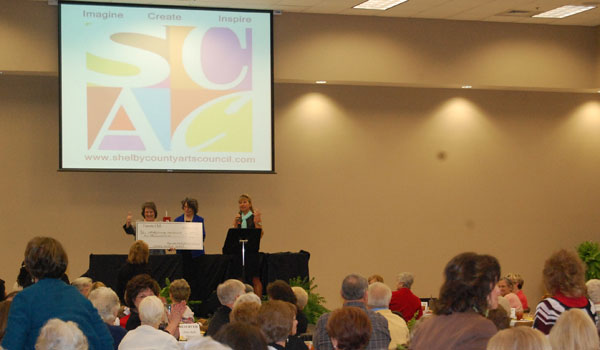 The Fist Market Restaurant provided lunch, and desserts were made by clubwomen.

Cato in Chelsea, Caché at the Galleria and Ann Taylor at the Summit provided adult fashions for the event. Fireflies and Fairytales at Lee Branch provided all of the children’s clothing.

Sullivan cited the importance of all of the programs for youth that the SCAC sponsors.

“You never know who will be the next Steven Spielberg or who will design the next Mercedes,” Sullivan said.

Sullivan also looked toward future projects such as the 25,000-square-foot venue the organization is looking to build in downtown Columbiana, which she promised would bring more people and money to Columbiana.

The SCAC New Year’s Eve bash was an example of this added revenue, Sullivan noted.

“I feel sure patrons bough gas, coffee and aspirin on their way out of town because it was a throw down,” Sullivan joked.

Sullivan said that “participation is vital” as the organization works to raise money for the venue in its “3,000 for $1,000” campaign where the organization is looking to 3,000 individuals, businesses or groups to donate $1,000 toward making the venue a reality.

The Vignette Club and the Novella Club both joined the campaign and donated $1,000 at the event.

“Everyone in the community will benefit from this project,” Sullivan said.

FROM STAFF REPORTS MONTEVALLO – Trailing in the seventh inning, the University of Montevallo was able to plate three runs and... read more