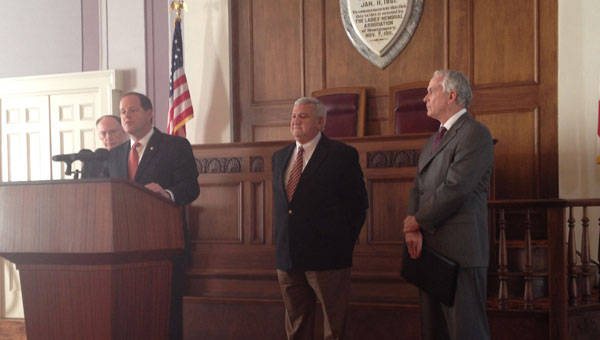 There’s an old saying in Montgomery political circles: “No man’s life, liberty or property is safe so long as the Alabama Legislature is in session.” This may be tongue in cheek, but it illustrates something many business leaders and citizens feel about our government.

That is why I am partnering with Gov. Robert Bentley and State Rep. Mike Hill to introduce legislation focusing on true accountability and transparency in our legislature.

We passed a relatively comprehensive Open Meetings Act over a decade ago, but it was gutted by our State Supreme Court in two recent decisions. Our bill will focus on keeping government open and transparent, while insuring constitutionality.

We must also get serious about an issue that will most certainly be contentious and controversial: judicial reapportionment. If we seek to fix the funding of the system as a whole, we need to reallocate the personnel as well as the money within the system.  This has not been done in over 35 years.

Caseloads have changed dramatically over the years, but there has been no effort to reallocate resources to address those changes. Every decade we use the census to re-draw the lines for all district-based office – except for those involving judges and district attorneys. Redistricting ensures the sacred principle of “One Man, One Vote” on which our country was founded.

We also must accomplish this without forcing anyone out of his or her duly elected offices, mid-term. This will be done via grandfathering and attrition of the current ranks – as judges whose seats are to go away retire, the opening for those seats will be moved to other circuits.

As you can imagine, almost every level of our legal system has a personal, professional and political stake in how we do this, and that creates roadblocks at almost every turn as well. As chairman of the Senate Judiciary Committee, I am committed to using common sense to allocate our judicial resources where they are needed.

I also intend to work with and fully support the attorney general and law enforcement in their efforts to expedite the death penalty process in Alabama.  This can be done in a constitutional manner while at the same time keeping the rights of victims a priority over the rights of criminal.

Another priority deals with our energy economy. I have spent much of my time between the end of the 2013 session and the beginning of the 2014 session studying this issue, and working with the private sector to enhance our balanced energy economy.

I intend to introduce legislation aimed at preventing the EPA from forcing unfunded mandates on states and private companies involved in long-range energy transmission infrastructure. This will ensure that the companies that operate in the energy production business in Alabama are not forced to build extra infrastructure such as pipelines to move types of energy they don’t produce, simply because the federal government wants to subsidize more expensive types of energy production on the backs of Alabama ratepayers.

Transparency, judicial reallocation and energy – those are the three areas I intend to focus during the 2014 Regular Session of the Alabama Legislature.  Despite it being an election year, I do anticipate and active legislative session.  Thank you for allowing me to represent you in the Alabama Senate and I look forward to hearing from you as the session moved forward.

Cam Ward is a state senator from Alabaster.

Henry Lester Aderholt was in his early 20s when he joined the U.S. Army in 1968. On Valentine’s Day in... read more