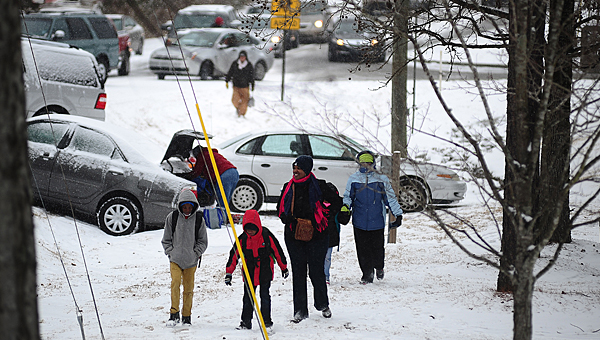 Students in schools in Shelby County likely will not have to make up days missed due to winter weather. (File)

Shelby County, Alabaster and Hoover schools likely will not be required to make up school days missed because of inclement winter weather, according to school officials and the Alabama Department of Education.

Over the past few weeks, local school systems have been forced to cancel several school days as severe winter weather – or the threat thereof – has hit the area. After dismissing early on Jan. 28, schools were out Jan. 29-31, dismissed early on Feb. 6 and were out on Feb. 11-12.

Because all missed school days came after Alabama Gov. Robert Bentley declared a state of emergency due to winter weather, schools in Shelby County likely will not have to make up the missed days.

“Once the governor makes that declaration for a state of emergency, it gives schools the right to waive those days,” Alabama Department of Education spokesperson Dr. Michael Sibley said during a Feb. 12 interview.

“When the governor declares a state of emergency, it does give the state superintendent the leeway to approve those waivers,” Warner wrote in an email.

Thousands of teachers and children were stranded in schools throughout Shelby County overnight on Jan. 28 after a winter storm slammed the area without much advance notice.

Alabaster City Schools Operations Coordinator Jeff Atkins said Shelby County has been “on the line” when severe weather has threatened the area over the past few weeks, and said the school system has canceled classes as a precaution when weather patterns are unknown.

“I don’t think any of it will have to be made up,” Atkins said. “We have been fortunate, not with the weather, but because the governor has declared a state of emergency each time we’ve had to cancel classes.”